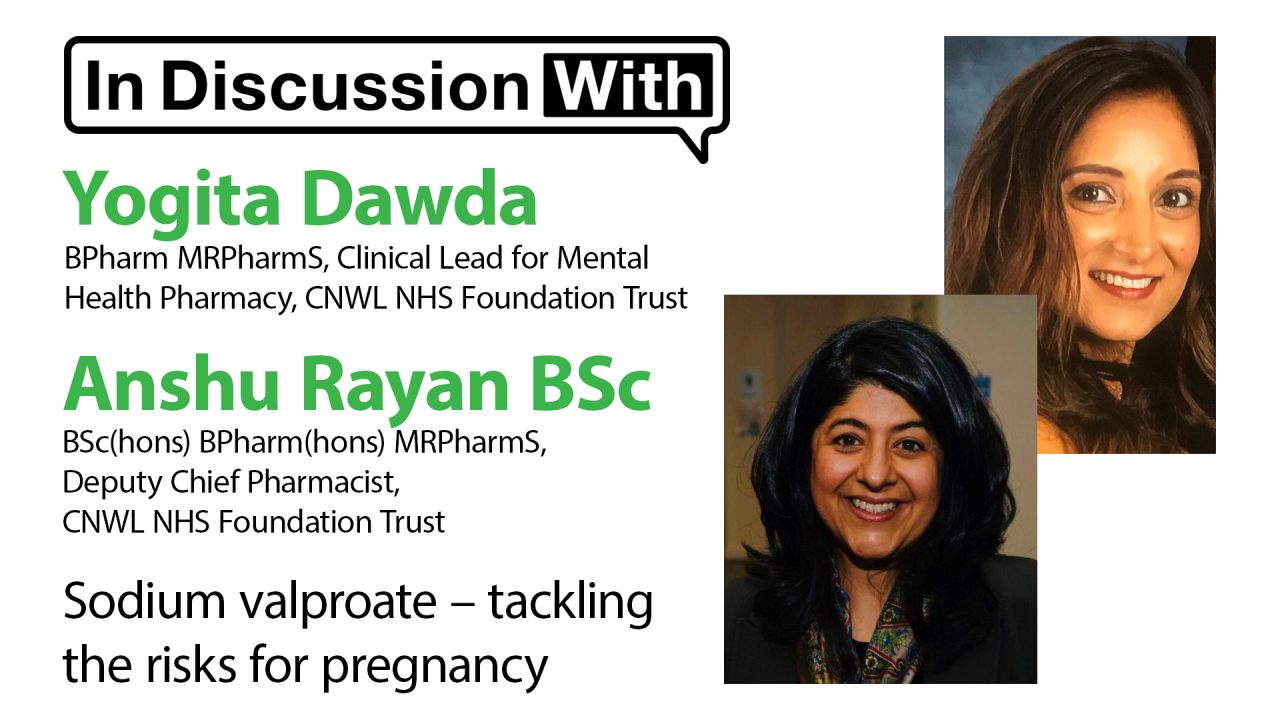 A recent newspaper article drew attention to the increased risks of birth defects in children of mothers who have taken sodium valproate during pregnancy. In this series of short videos, experienced mental health pharmacists, Yogita Dawda and Anshu Rayan describe the risks, the measures that have been introduced to raise awareness and minimise risks and the innovative approaches that have been developed at Central & North West London (CNWL) NHS Foundation Trust.

Ms Dawda is an independent prescriber who runs a mental health clinic for patients with complex medication needs. She notes that ever since its introduction in the 1970s sodium valproate has carried a warning about the risk of possible birth defects and the warnings have been updated over the years as more evidence has emerged. “The most recent evidence suggests that [for] children exposed to valproate during pregnancy, there’s a one in ten … risk of birth defects and up to four out of ten are at risk of developmental disorders – so the risks are really, really high”, she says.

Although regulations introduced in 2018 banned the use of valproate for women and girls unless a rigorous pregnancy prevention programme was in place, compliance turned out to be patchy. “The patient actually needs to sign [a detailed Risk Acknowledgment Form] to say that they have been informed of the risks and understand the need to avoid pregnancy whilst they’re on treatment”, explains Ms Dawda. However. the 2020 Cumberlege report – First do no harm – concluded that, “Despite these measures, hundreds of women are still becoming pregnant on valproate while unaware of the risks”.

Important new measures include the requirement to dispense valproate in the manufacturer’s original pack that bears a warning message on the outside, an annual review at which the risk acknowledgment process is repeated and the establishment of a national valproate registry.

At CNWL a local valproate register is used to monitor their own practice. CNWL also participates in a national POMH (Prescribing Observatory for Mental Health) audit that is led by the Royal College of Psychiatrists.

In a bid to communicate more effectively with patients the team at CNWL has developed emotionally engaging valproate information videos that can be accessed via QR codes attached to medicines’ packaging. They report positive feedback from both patients and healthcare professionals.

Anshu Rayan, Deputy Chief Pharmacist at CNWL explains that a key feature of the video-based medicines information project is that it has been developed in collaboration with patients and carers. In addition to valproate, videos about other high-risk mental health medicines such as lithium and clozapine have also been developed.  However, the concept could be further developed to include other topics such as pre-exposure prophylaxis (PrEP) for HIV and opioid substitution therapy and prevention of overdosage.

Future applications of the video-based information could include over-prescribing and de-prescribing and also provision of tools to help people remain well after discharge from hospitals to prevent readmissions. Training for healthcare professionals in the use of a good checklist for counselling patients about high-risk medicines, could also be tackled in this way.

Ms Rayan and Ms Dawda would like to see video-based information of this type being recognised and taken up by the MHRA and the pharmaceutical industry in the interests of improving patient care.