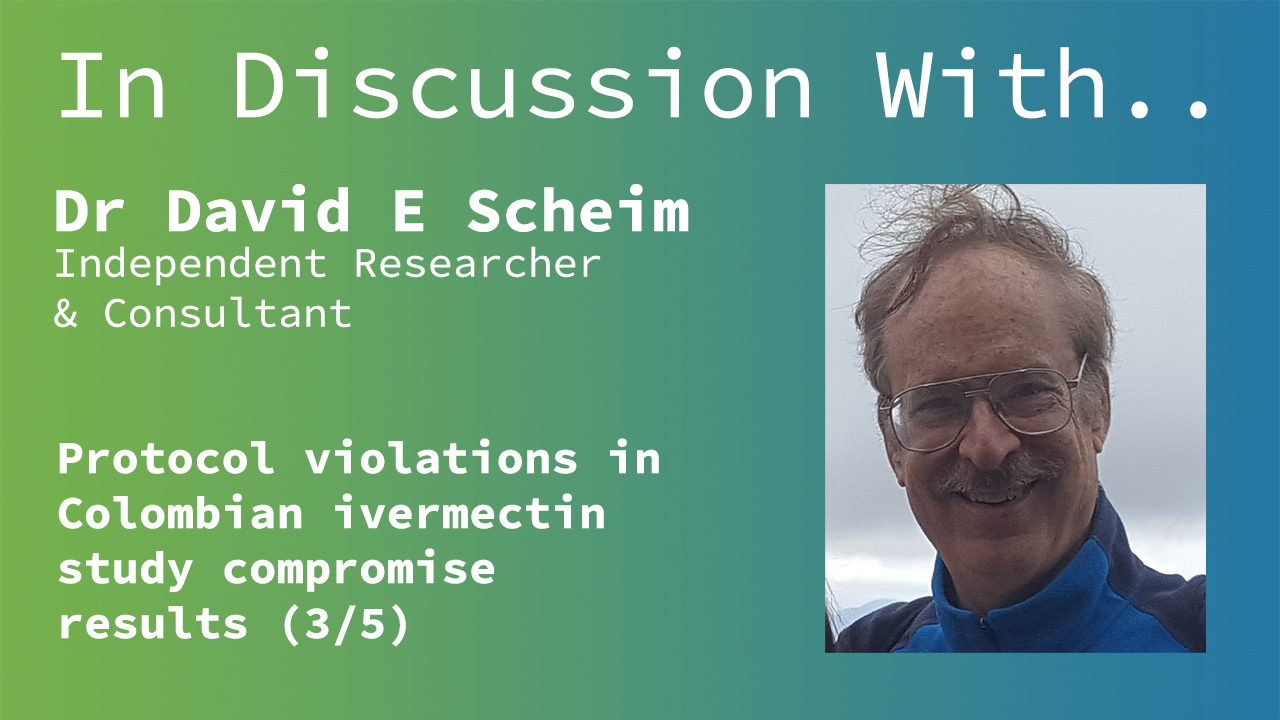 Dr David Scheim explains how multiple protocol violations and widespread use of over-the-counter ivermectin could have compromised the results of a recent controlled trial of ivermectin for covid-19 in Colombia.

The results of a recent randomised, placebo-controlled trial of ivermectin for covid-19 appeared to show that ivermectin was no better than placebo but closer examination reveals a number of problems that call this conclusion into question.

There were no deaths in the ivermectin group and one in the control group, however, the study population was young (mean age 37 years) and “they were looking at very nebulous parameters”, notes Dr Scheim.

One problem that is immediately obvious relates to the matter of blinding and matching of the placebo. “This is supposed to be a double blind study. The first 64 patients – they gave them sugar water. If you’ve tasted ivermectin it’s bitter; it doesn’t taste bad but it has a real distinctive taste”, explains Dr Scheim.  Later on the manufacturer of the ivermectin solution used for the trial provided a reformulated placebo ‘with similar organoleptic properties’.  “But they don’t say what it was – no word about its composition, nobody tasted it, nobody tested it – so it’s not double-blind” comments Dr Scheim.

Some three months into the study the lead pharmacist “observed that a labelling error had occurred between September 29 and October 15, 2020 resulting in all patients receiving ivermectin and none receiving placebo during this time frame” 1  “They switched, mislabelled 38 doses – 38 patients who were supposed to get placebo got ivermectin so they had to go to contortions to compensate for that”, says Dr Scheim.

An even more serious problem was the widespread availability of ivermectin and use of over-the-counter by the Colombian population at the time of the study. “Look at Google searches – they spike. Look at over the counter sales in Cali during the whole study period – they’re enormous – 1.6 doses of ivermectin for every case of covid”, says Dr Scheim. The study was designed to monitor patients for adverse effects characteristic of ivermectin. “They are exactly the same to 0.1.or 0.2% in the ivermectin and the control group…….. basically, it looks like all the controls were taking ivermectin”, he says. He suspects that many of the study participants, realising that they had placebo, simply purchased ivermectin.

“The study totally violated every norm of good procedure so this study is only useful for the ivermectin group. The conclusion that they put out is totally unsupported”, concludes Dr Sheim .

“This was quite a high dose of ivermectin – this one of the largest doses used in any clinical study – 7.5 times the normal dose. ………..So they were not serious side effects but they were very characteristic of high-dose ivermectin use and they’re not characteristic of covid. A couple of these adverse effects – the incidence for covid was way less than the incidence for ivermectin. So, you’re getting the identical fingerprints in the ivermectin group and the control group.