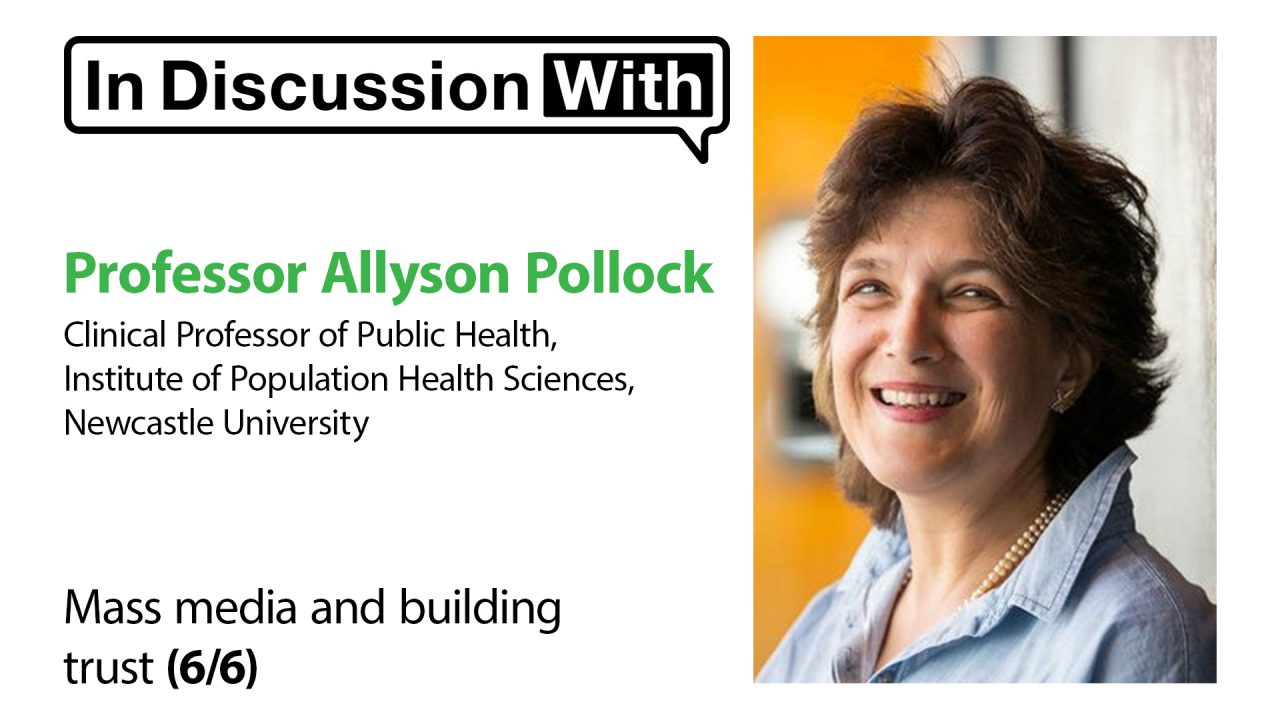 Open discussion of the scientific evidence and the uncertainties could have generated less political polarisation, less wasted expenditure but built more trust, according to Allyson Pollock, Clinical Professor of Public Health, Newcastle University.

“One can understand the BBC, as part of the state apparatus, would be putting out the messages that the Government wants the public to hear – and propaganda is very important to get the message right – but some of the media hasn’t been at all helpful in that they’ve increased the political polarisation”, says Professor Pollock.  Similar problems have occurred with scientific discussions.  It would have been more helpful had the media taken the time to explore the uncertainties and unknowns and said, “Well, these are the uncertainties [and] unknowns and this is what we’re doing and why we’re doing it. We don’t quite know, but this is why we think it might be beneficial”, as was done in Sweden, Norway and Denmark.  Such an approach wins a lot of trust, she notes.

On the other hand, “If you don’t declare the unknowns and uncertainties – as the Government has often done, and even the Chief Medical Officers – then actually you break trust, especially with people who are questioning or sceptical”, says Professor Pollock. Everyone has a lot of questions about pandemic control measures, especially if what they see around them suggests that they don’t appear to be working or they appear to be ridiculous. This was a particular problem with vaccination, “especially when we were told that one vaccine then two vaccines would work and then we suddenly into a third one and then a fourth one. People were saying, “Hang on, never in the history of vaccination have we done this sort of boosting and what are we doing to ourselves and our immune system?” so they’re raising very genuine questions and yet they’re constantly being shut down”, she says.

Had the Government simply declared the uncertainties and unknowns and taken a lot more of the expert advice that was available there could have been less political polarisation and perhaps a lot less wasted expenditure. It was this kind of thinking that prompted Professor Pollock, together with Professor Davey-Smith and the BMJ to run a series of webinars dedicated to discussions by experts of the unknowns and the uncertainties from school closures to variants to vaccinations.

Professor Pollock has two messages for health care workers in primary care. First, knee-jerk reactions should be avoided if possible and time should be taken to weigh up the available options and when measures are rolled out, studies should be put in place at the same time to evaluate the benefits and harms. Second, “it’s equally important as a health professional to express uncertainties and unknowns in your own profession, and to be very honest at the individual patient level as well as the public level – and that way you build trust”.