Mass testing – in theory and in practice 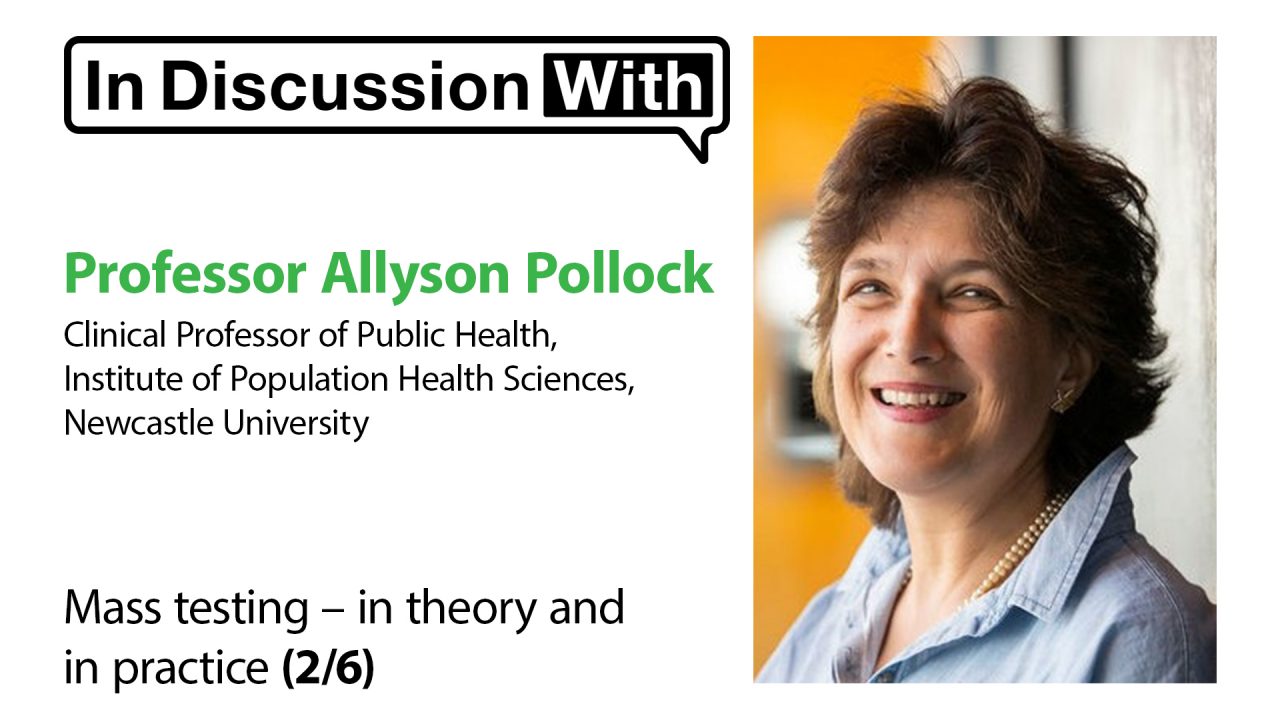 There was no evidence that mass testing stopped or prevented the transmission of covid-19, according to Professor Allyson Pollock, Clinical Professor of Public Health, Newcastle University.

“Mass testing – if you’re testing healthy or asymptomatic people – this is known as screening. Way back in the 70s and 80s, as more and more tests were being launched in the market,  …… the WHO (World Health Organisation) realised they were going to have a problem [in] that they had an unwitting public who were going to be exposed to a lot of  tests in the belief that it would help early diagnosis and [disease] prevention”, says Professor Pollock.  The WHO commissioned James Wilson and Gunnar Jungner to look into the issue and in 1968, The Principles and Practice of Screening for Disease1 was published. “The test is only the beginning of the story – you have to have a safe test, it has to be effective, it also has to be acceptable to people before you roll it out – but a test is always followed by an intervention”, explains Professor Pollock.  In the case of covid-19 the intervention was not treatment but quarantine of the individual case, then contact tracing and isolation of those contacts for a period of 10 to 14 days. “The thing to remember is that all tests do harm and the important thing about the test is [that] it’s not only got to be safe but the benefits and the costs of the test should outweigh the harms and the costs of the test – and that’s really important”, she says.

In fact, “the government decided to roll out mass testing without doing prior evaluations or putting in place good trials to see whether these tests were going to be effective and beneficial”, says Professor Pollock. This approach has not been used in the past. Usually, the approach would be to work out which population group would benefit most from the test and then carefully target the test at that group.  The risks of testing were understood and for this reason the government set up the UK National Screening Committee (in 1996) under the leadership of Professor Sir Muir Gray.

Professor Pollock says, “The extraordinary thing about mass testing for covid was [that] it did not go through the UK National Screening Committee and if it had, the UK National Screening Committee would have said ‘Now, you need to remember that all tests do harm. We need to make sure these tests actually work – they do what they say they do – but also that the interventions are not creating more harm than good.’”

Furthermore, all tests create false positives which means that there is unnecessary isolation of all the contacts. There are also false negatives “which means you get false reassurance and people going into the workplace ….. when they think that they’re negative [and] they feel they have a green light to go”, she says.  “These are very important considerations. Now, of course, covid is very common we’re getting a lot of reinfection ……… so now, definitely, for sure, all mass testing should cease”, says Professor Pollock.

Testing should now be carefully targeted and evaluated as part of local public health outbreak control in order to avoid the situation where people who are well and healthy are forced to isolate unnecessarily – a situation that has a major impact on public services, including hospital services, nursing homes and transport services.  “This is why you have to be very careful when you’re proposing doing mass testing – and as you can see many countries now are rolling back and stopping mass testing completely – Sweden, Norway [and] Denmark for example”, she says.

“The whole object of doing a test is to intervene early in order to break the chains of transmission – so that’s the whole principle behind contact tracing. You isolate the case and their contacts because you’re trying to stop transmission but now that the virus is endemic, you’re not going to be able to stop transmission. You may try and suppress it, especially in certain vulnerable groups, but the very big problem now is because we’ve got a mass testing measure that’s being targeted indiscriminately at the whole population and we have very little evidence that mass testing has actually broken the chains of transmission and actually prevented disease from occurring. ….  Throughout January we had a lot of mass testing and isolation, we also had huge numbers of cases so clearly something wasn’t working. The Public Accounts Committee, earlier this year in October, also published a report saying that despite the billions and billions of pounds spent on Test and Trace, ……. there was really no evidence that it had stopped or prevented the transmission of the disease”, concludes Professor Pollock.