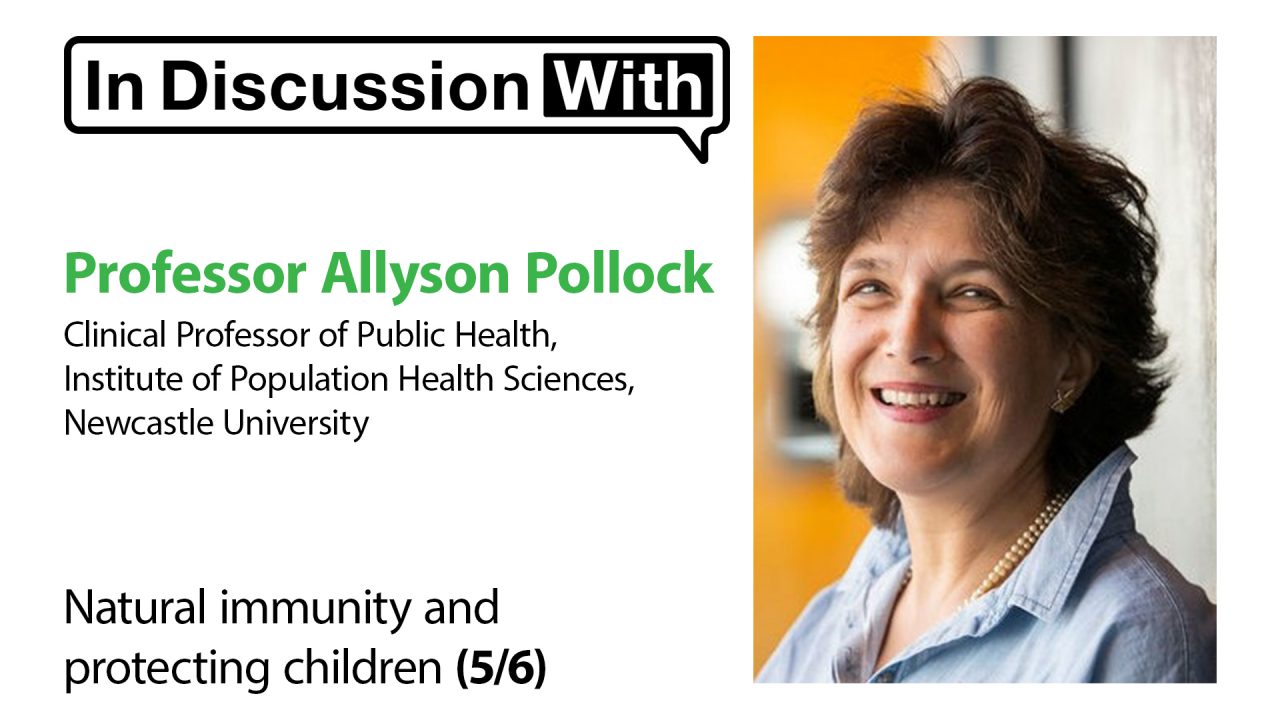 Covid is far less serious for children, long-covid is not a big issue and many also have natural immunity – all of which raises questions over whether children require vaccination at all, according to Professor Allyson Pollock, Clinical Professor of Public Health, Newcastle University.

“I think the most extraordinary thing in the UK is the way natural immunity has been ignored especially for those healthcare workers that were exposed early on and had it ……..  What we know is that your antibodies may wane very, very fast and we really don’t know what the antibodies actually mean ….  but we do know that once you’ve been exposed to the whole virus you will raise your B cells and T cells, your memory cells will be there, ready to launch antibodies when you need them” explains Professor Pollock. It is not known how long this immune memory will persist or whether it will protect against all variants. “Actually, one of the things about the virus being endemic is that by having re-infections you’re constantly topping-up that immunity so re-infections tend to be very mild”, she adds.

‘Topping-up immunity’ is an important concept for community health. Professor Pollock explains that when children were excluded from education in schools for long periods over the past two years an unusual phenomenon emerged. “What we saw in the summer time was something quite extraordinary – we saw respiratory syncytial virus (RSV), which is a seasonal virus, coming back in the summer. Children are much more at risk of serious outcomes from RSV than they are from covid”, she says.  Effectively, children who had not been exposed to viruses routinely in play and in school experienced ‘immune depletion’ “so when they came back, they came back with a vengeance”. Topping-up immunity through frequent, low-level exposure is what happens with the common cold viruses.  “I think the average is one or two corona viruses in the year and you’re constantly topping-up so you’re no longer naïve and the whole problem with covid was [that] it was hitting a population that was completely naïve, that had never been exposed to this virus before”, she says.

Several groups have expressed concern about the wisdom of vaccinating children against covid-19. In January 2022 a group of senior doctors, public health specialists and members of parliament set out their concerns in an open letter to the Joint Committee on Vaccination and Immunity (JCVI).

Covid is far less serious for children and although there was some concern that long-covid might be a problem this has turned out not to be the case. However, “there are many, many uncertainties around the benefits for children especially since we know [that] over the summer a lot of children had been exposed to the virus and had established immunity. Indeed, one could hypothesise that it’s in children’s interest to have this virus and prime their immune system when they’re young and less at risk”, says Professor Pollock.   The absence of good data on the medium and long-term harms and the benefits of vaccination make the decision difficult. One possible harm is being exposed to the virus later on in life when the immune system has not been primed by the whole virus. “There are many people who have raised really serious concerns because for children it’s really important, because they have to live with those harms for the rest of their lives. I think it’s really important that that evidence is reviewed especially [given that] we know that children have a lot of natural immunity through infection ….and if there’s a lot of reinfection occurring that they’re constantly being primed. I know that yesterday Denmark said it won’t be doing any boosters for people under 18 and it even seems to be saying that they’re not going to be doing fourth boosters, except those who are most at risk. So, I think it’s really time we began to question whether we should be carrying on with boosters and vaccines and if we should, which groups should be having them but certainly children are least at risk and it’s where the greatest uncertainties about any benefits are and where there are very many unknowns about the harms long term”, she says.