Covid passports – the questions to ask 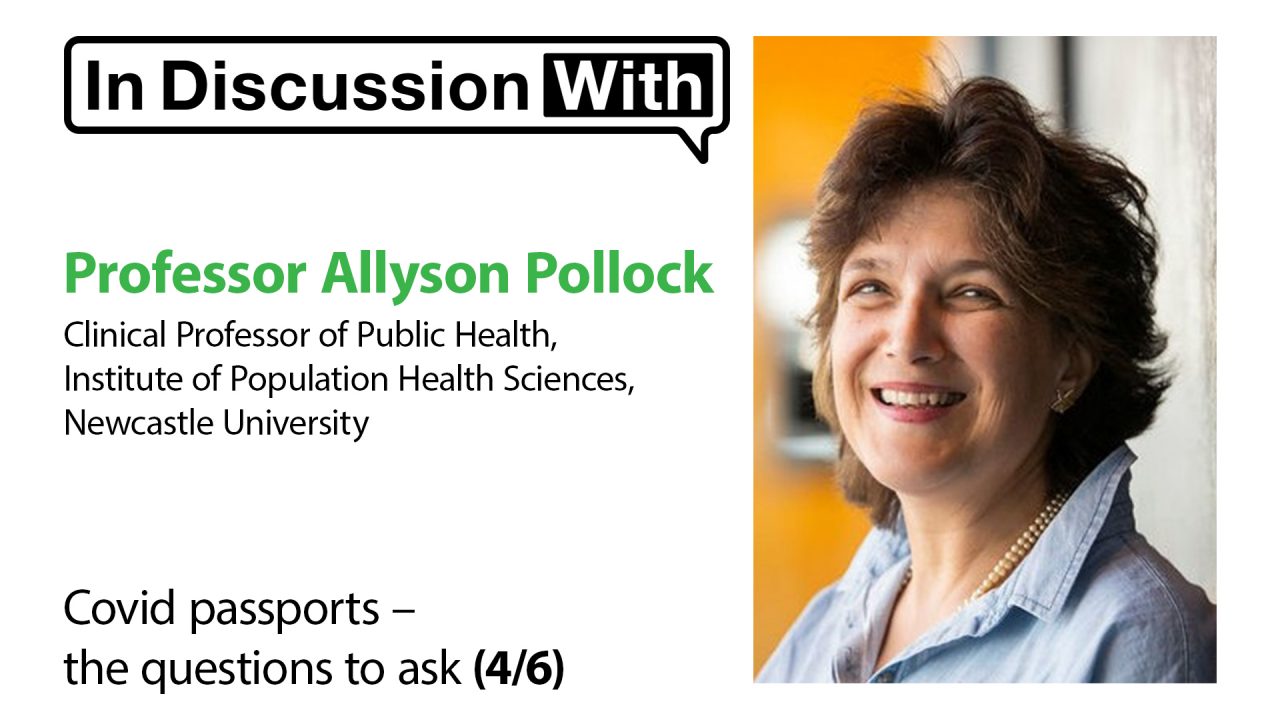 There are several theoretical reasons for implementing vaccine passports but now that none of these apply any longer in the UK it is difficult to see a rationale for them, according to Professor Allyson Pollock, Clinical Professor of Public Health, Newcastle University.

The main reason for the introduction of vaccine passports is to increase vaccination uptake. When vaccine uptake is low – 10-20 percent – this can be an important consideration but, in the UK, there is already 90 percent uptake of covid vaccination and so there is little to be gained.  “There wasn’t good evidence that we needed to do that and, in this country, we’ve always used trust and education. Vaccination has not been mandatory for over 120 years and for very good reason – so that’s quite extraordinary – it’s a coercive measure which is completely against all ethical principles”, says Professor Pollock.

A third reason for vaccine passports is that vaccination protects the individual but we now know that there are only certain groups for which the risks of covid infection are high. Furthermore, “What we now know is that there’s a complete decoupling of the cases – you can have very high numbers of cases but a very low number of hospital admissions, very low number of ICU cases, ……  and actually, deaths are now falling below the seasonal average for covid ……  So, there isn’t a case around the individual because we’ve got good, well-established population immunity  – or even for protecting the health service – so it’s very difficult to understand what the rationale is for covid vaccine mandates”, says Professor Pollock.

The Government would probably have found it very difficult to prove that it had provided enough evidence and that it was a proportionate measure and this may have influenced the recent revocation of the vaccine regulations (see Editor’s note below) for health and social care staff.  However, the Chief Medical Officer has now written to professional regulatory bodies such as the General Medical Council, urging them to make vaccination a professional responsibility. “Now that is very worrying because it’s another coercive measure”, says Professor Pollock.

At present we do not know enough about the short, medium and long-term harms associated with covid vaccination. Suitable trials have either not been undertaken or they have not continued for long enough to provide the information that is needed. In this situation the only information comes from ‘yellow card’ (voluntary) reporting that tends to under-report. “What we do know is that the risks are greater than the benefits for some groups of people so it’s very important that we weigh that up – but the Government has not addressed these questions on prevention. …. Why they’re targeting healthcare workers [whose] average age is 43 or 45 years, so they’re in a low-risk group – much lower risk than [participants in] the trials and whether there would be any benefits from vaccination, either in preventing pressures on the health service or preventing transmission, and those questions have not been addressed”, says Professor Pollock.

Many people believe that a positive PCR test indicates infectiousness. Professor Pollock explains that a recent report by Professor Carl Heneghan and colleagues has shown “some of the very many issues with PCR tests”.  There may be as many as 400 different tests in use in Europe and this coupled with a lack of standardisation and quality control confuses the picture. “What we know about the PCR test is it can test viral fragments and relics of the remnants of the virus for as long as 90 days post infection”, she adds.

Since this interview was recorded the UK Government announced that the vaccine mandate for health and social care workers will be revoked from 15th March 2022.