Covid vaccination – the knowns and unknowns 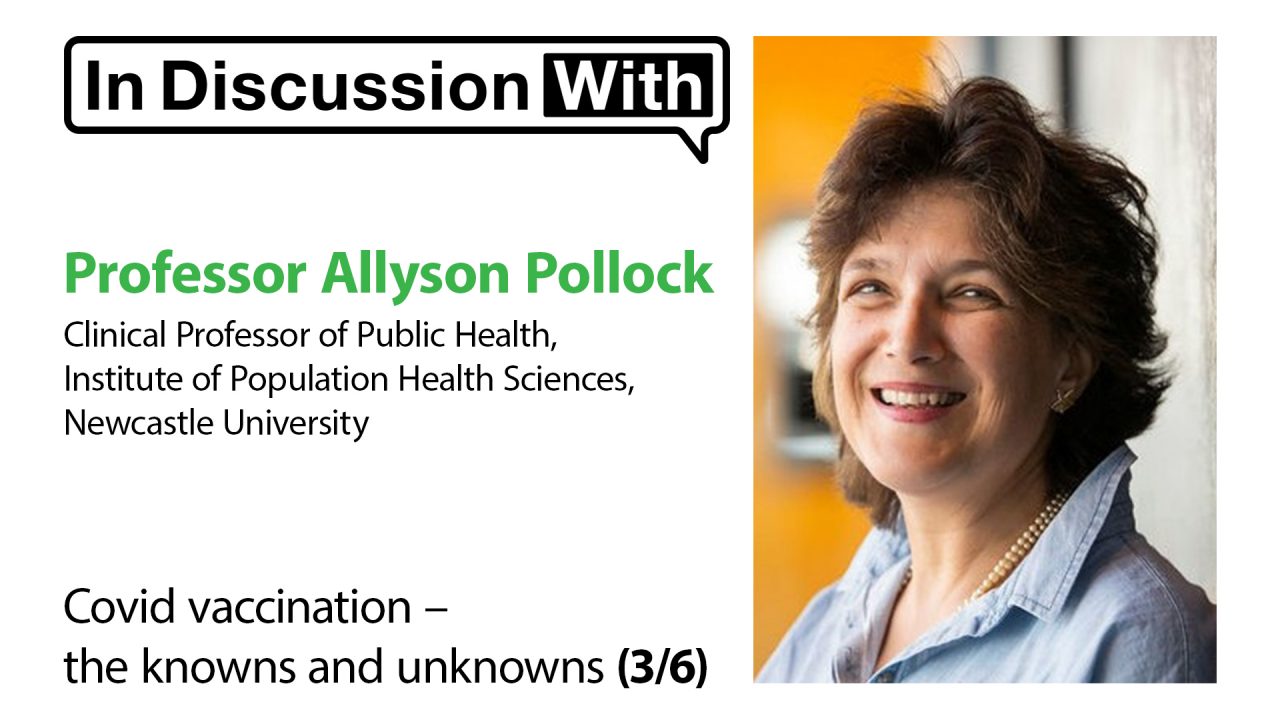 Many factors influence decisions about vaccine use including many ‘unknowns’ and this raises questions about the wisdom of targeting young people and recommending boosters for everyone, explains Allyson Pollock, Clinical Professor of Public Health, Newcastle University.

“These vaccines were rolled out at speed, well in advance of us having access to all the data”, says Professor Pollock. Not only were there problems of transparency and insufficient trial data but also the roll-out preceded the completion of trials, which can take five or ten years for vaccines. “Like tests, you have to remember all tests do harm – you’re hoping the benefits outweigh the harms – but all medicines and vaccines also do harm and the only way you can really establish the benefits and the harms are through trials which are large enough but also go on for long enough – because you’re trying to make sure you detect the signals for harm as well”, she says.

It is now known that while the vaccines may appear to have been very effective in preventing severe illness, hospitalization and death, their effectiveness wanes very rapidly over time. By about 20 weeks their effectiveness has fallen and it is uncertain how much immunity has been established in the population by then. However, there has been a lot of infection and re-infection, mainly occurring now in the vaccinated population.

An important issue now is that studies of vaccines tend to be observational studies, such as those comparing vaccinated and unvaccinated people in intensive care units – and all observational studies are subject to confounding.  Professor Pollock explains, “What we know about people admitted to ITU is, whether they’re vaccinated or unvaccinated, a higher proportion are poorer and also have co-morbidities.  We know that these are the risk factors in both the vaccinated and unvaccinated groups but that is as far as you really can go because the unvaccinated are not at all like the vaccinated for many reasons. We know they tend to be much poorer and also, they [tend to belong to] certain ethnic groups. So, you are not comparing like with like when you compare the outcomes of vaccinated and unvaccinated because the denominators from which they’re drawn are so different.” She also notes that reports from the Office for National Statistics (ONS) say “tucked away in the small print” that comparisons between these groups are not measures of vaccine effectiveness.

“The only good measure you’re going to have [of] vaccine effectiveness will be from the long-term, phase four studies, but ….. if you start to vaccinate your whole population you are never going to know”, she says.  A number of factors could be contributing to the current picture. These include ‘survivor bias’ (the situation where vulnerable individuals have already died leaving a healthier population behind), established immunity for previous covid-19 infections, the effectiveness of the vaccine and the behaviour of the omicron variant. “So, you’ve got all these factors playing out and huge amounts of unknowns, which really raises questions about why we’re …. giving vaccine boosters to everybody and why we’re targeting young people; some countries now like Denmark are moving to only boosting very vulnerable people say in nursing home or care settings”, she adds.

Asking questions about vaccines and vaccine policies does not make you an ‘anti-vaxxer’, emphasises Professor Pollock. “I think there are still huge uncertainties about vaccines, their effectiveness, whether we should be continuing to use them and whether they are appropriate [for use] in the way that we’ve done for mass testing – to blanket target the whole population. And then that raises questions in turn about the other measures such as vaccine mandates for social care workers and healthcare workers most of whom ……  have been vaccinated anyway, but they’ve been vaccinated with a vaccine which has been shown to diminish in its effectiveness and we have a lot of reinfection now amongst the vaccinated group that is less serious with less serious outcomes”, she says.