Diagnosis and self-help for ovarian cancer 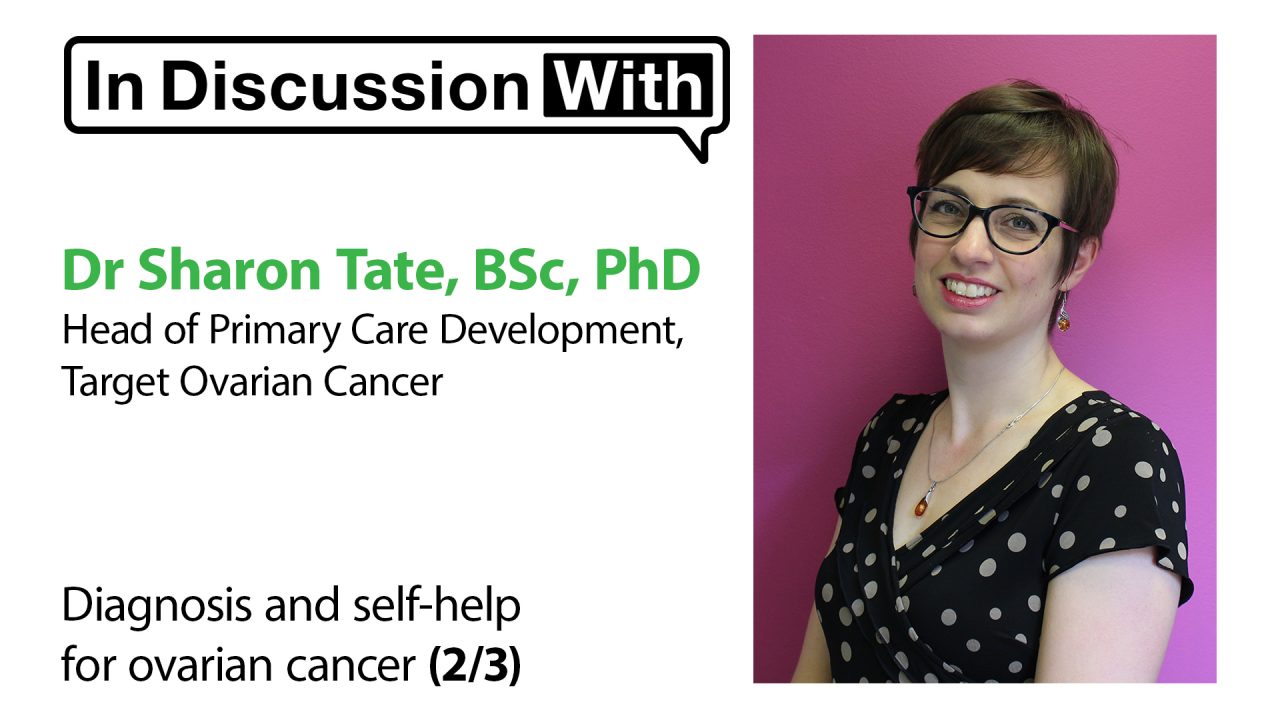 It is a complete myth that ovarian cancer is a silent killer – even early-stage disease causes symptoms and knowing what they are is key to early treatment, according to Dr Sharon Tate, Head of Primary Care Development, Target Ovarian Cancer (TOC).

Target Ovarian Cancer works hard to stamp out the myth of ‘the silent killer’, says Dr Tate. In fact, research shows that the majority of women experienced symptoms in the months prior to diagnosis. Moreover, “for many years it was taught that only women with advanced stage disease experience symptoms or present with   symptoms and therefore there was nothing that we could do. That’s not the case – women with all stages of ovarian cancer are presenting the symptoms”, she explains. This means that there are opportunities to identify the disease in its early stages.  Part of the problem is that many people are unaware that the symptoms (see the first video in this series) can be associated with something like cancer and so they do not discuss them with their GPs. “From the GP or health care professional perspective the symptoms can be very subtle in presentation. They may also – because of the age group we’re thinking about – present with other comorbidities and so it’s really easy to attribute those to a benign condition like irritable bowel syndrome – it’s a very common misdiagnosis. So, what I would say …. is, please remember that irritable bowel syndrome (IBS) is extremely uncommon as a new diagnosis in women over the age of 50. So, if you are thinking IBS, then please just consider ovarian cancer. Do a CA-125 test, do an ultrasound, get it ruled out before you proceed any further”, says Dr Tate.

A CA-125 test is a blood test that should be available to all GPs practising in the UK. “It measures the level of CA-125 [protein] in the blood and guidelines tell us that the normal level is 35 [units per millilitre (u/ml)] or below, so anything above 35 we would be maybe starting to think about ovarian cancer, particularly in women over the age of 50”, says Dr Tate.  CA-125 can be raised in other conditions such as   endometriosis, menstruation, ovarian cysts, some inflammatory conditions and other cancers “but at the moment it’s the best tool we have in primary care to start us on the right pathway of diagnosing ovarian cancer”, she adds.

Two thirds of UK women with ovarian cancer are diagnosed at an advanced stage when the cancer has already spread beyond the ovary. Dr Tate pinpoints low awareness of symptoms and the fact that NHS systems are not always in place to support GPs as the two main factors that contribute to delayed diagnosis.

“We have a huge problem with awareness of symptoms among the general public, we also have an issue with awareness amongst GPs and therefore them recognising symptomatic patients when they present. Also, the NHS systems are not always in place to support GPs to get that early diagnosis for patients. Target Ovarian Cancer is working across all of these issues. We’re currently calling for a dedicated   symptoms awareness campaign across the UK so that we can finally make some   progress on public awareness”, says Dr Tate.

Target Ovarian Cancer offers a comprehensive range of training and education materials for GPs including e-learning modules with BMJ Learning and the RCGP. There is also a project, currently underway, that is seeking to overcome some of the delays or to address some of the systematic barriers that may be causing delays in   diagnosis.

Unlike some other cancers there are no easily-modifiable lifestyle factors for ovarian cancer.  The main risk factors are increasing age and a genetic predisposition. Dr Tate says, “Knowledge is power, so know your own body, know what is normal for you, know the symptoms of ovarian cancer and be aware when they start. If you do get something that you’re concerned about then take that knowledge to your GP as soon as possible and report them. And if you are worried about ovarian cancer then I would advise people to absolutely ask about it. Don’t assume that your GP is going to necessarily think about that initially. I would ask about it if you are worried.”

Screening for ovarian cancer has so far proved to be unsuccessful in reducing mortality.  Dr Tate says, “We would love to have a screening program in our arsenal! No screening program is perfect, it’s part of the approach to addressing early   diagnosis. There have been some major clinical trials undertaken, both in the UK and beyond, to look at screening tools and interventions to see if they have an   impact on diagnosis and the most important outcome, which is mortality”. In some cases, some cancers were diagnosed at an earlier stage, she acknowledges. New research into biomarkers and diagnostic tests might lead to the development of effective screening programmes in future, but “at the moment that isn’t something on   our horizon”, she concludes.