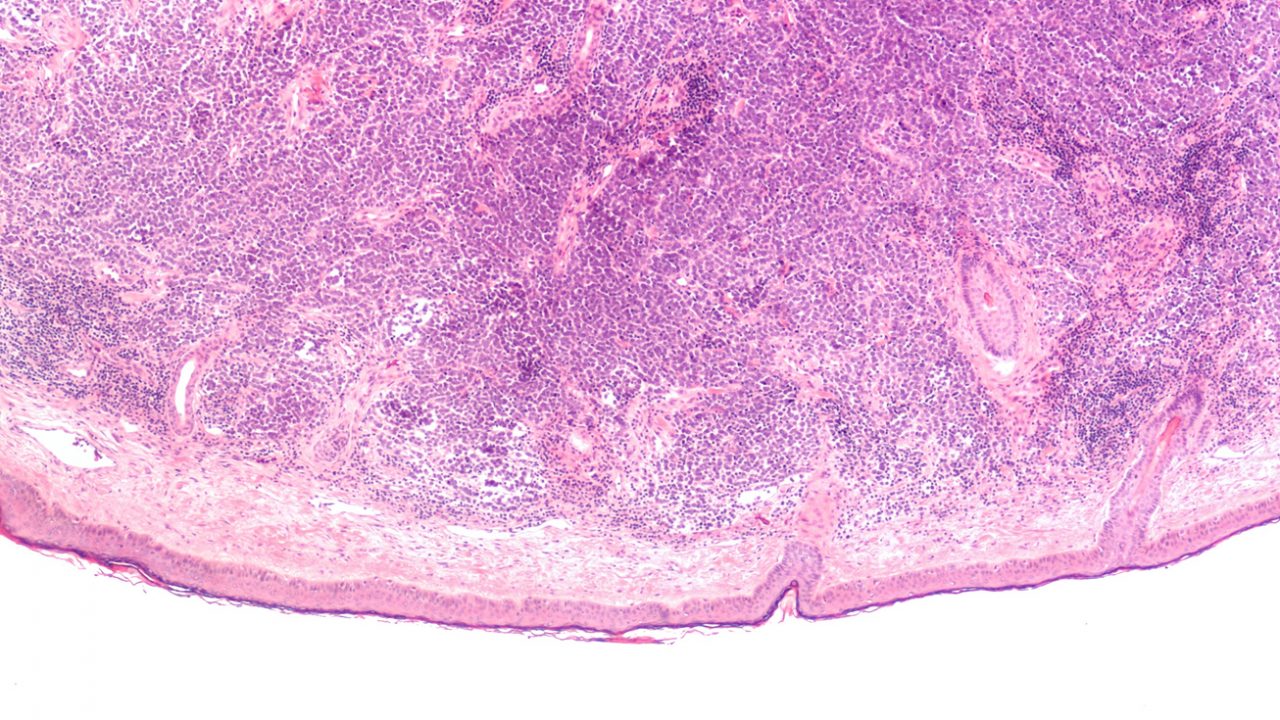 Patients treated for Merkel cell carcinoma (MCC) face a five-year recurrence rate of 40% — markedly higher than the recurrence rates for melanoma and other skin cancers, according to research published today in JAMA Dermatology.

Additionally, in the study cohort of more than 600 patients, 95% of MCC recurrences happened in the first three years, suggesting that surveillance efforts should be focused on that span the authors wrote.

“Merkel cell cancer is a life-changing diagnosis. It can be time-consuming, costly and exhausting to undergo clinic visits, imaging studies and blood draws. Now we have data on the time intervals and cancer stages that merit higher or lower surveillance intensity,” said Dr. Aubriana McEvoy, who led the research while she was at the University of Washington School of Medicine. She is currently a dermatology resident at Washington University in St. Louis.

Merkel cell cancer is a rare, aggressive skin cancer, more often fatal than invasive melanoma and basal-cell and squamous-cell carcinomas. Merkel cell carcinoma is composed of cells that look very similar to ‘Merkel’ cells that are a key part of the epidermis, the skin’s outer layer. Normal Merkel cells communicate touch-related information such as pressure and texture to the brain.

This study comprised 618 patients (37% female) whose ages ranged from 11 to 98 and whose median age was 69. In this cohort, initial treatment (surgery, radiation and systemic therapy) had a median duration of 90 days.

The authors sought to characterize post-treatment recurrence risk of MCC diagnosed at pathologic (listed below) and clinical stages.

Risk of recurrence at one year was found to be:

MCC survival “is a more accurate measure of disease risk than overall survival,” the authors wrote, because patients, with a median age of 70 at diagnosis, are at “considerable” risk of death from conditions unrelated to cancer. Again, stage at diagnosis was associated with a meaningful difference: 90% of deaths among patients with stage IV disease were attributed to MCC, whereas just 57% of deaths among patients diagnosed at stage I were attributed to the disease.

“This is a tricky cancer to beat because it comes back — after optimal therapy in almost half of patients. We want to help patients figure out how much remaining risk of recurrence they have at various times after diagnosis,” said Dr. Paul Nghiem, chair of dermatology at the UW School of Medicine. He is the study’s senior author and an expert on Merkel cell cancer.

He added that the UW’s database is likely the most comprehensive anywhere for MCC case therapies and outcomes.

“These are all patients who were followed meticulously to know why they’re doing well or not doing well. The size of the data set has allowed us to see patterns more clearly, and we need data to drive optimal decision-making,” Nghiem said.

U.S. incidence of MCC is low relative to other skin cancers, but also is on a steep upward trajectory because the disease is closely associated with age. About 3,200 cases will be diagnosed this year, according to a 2018 study by Nghiem and colleagues.

By contrast, about 100,000 new melanomas will be diagnosed this year. Basal cell carcinoma is far more common, with 3.6 million cases diagnosed annually, and squamous cell carcinoma numbers 1.8 million new cases a year, according to the Skin Cancer Foundation.

Each of these cancers has a significantly lower post-treatment recurrence rate than MCC, the authors noted: melanoma 19%, squamous cell 5-9%, basal cell 1-2%.