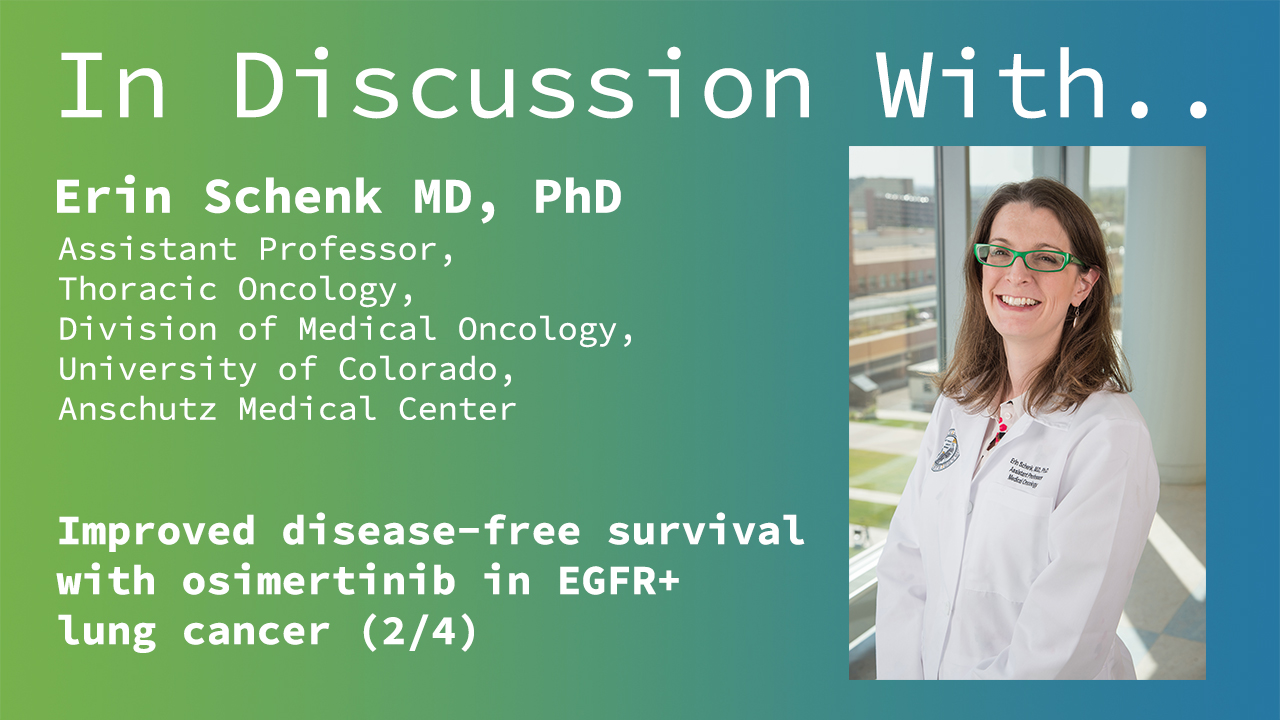 Dr Erin Schenk, Assistant Professor, Thoracic Oncology, University of Colorado describes the results of the ADAURA trial and the implications for her practice.

The other trial that has really come to the forefront in discussions in academic oncology practice in the United States is the ADAURA trial. This trial randomised patients with completely-resected, EGFR-positive, non-small-cell lung cancer (NSCLC) to receive either standard of care (SoC) treatment or SoC plus osimertinib. This trial again illustrates the importance of biomarkers.

“This is one of the trials where these biomarkers that we often use in metastatic disease may also become important in patients with early stage disease where we treat them with curative intent”, says Dr Schenk.

The ADAURA trial recruited patients with NSCLC with the EGFR mutation – a feature that in the metastatic setting is often sensitive to tyrosine kinase inhibitors (TKIs) that prevent certain mutations from being active and causing cancer cells to grow. Patients in the osimertinib group received the drug for a period of three years.

The reason that this trial has generated so much discussion and so many different opinions on what to do, is that it was an early report on the data and so we don’t have clear survival data [to show whether] adding osimertinib would help patients live longer. What we have is a measure called ‘disease-free survival’”, explains Dr Schenk.  This shows that patients, who received osimertinib for three years, had reduced chances of recurrence of their lung cancer compared to the control group. However, previous trials of a similar design have been carried out with early-generation EGFR inhibitors and the results showed that eventually the survival curves met, meaning that adding early-generation EGFR-TKIs did not help to cure more patients. Some clinicians argue that the degree of disease-free survival is so significant that patients need to be presented with the data and have an opportunity, with their physician, to make an educated choice about whether or not to take osimertinib.

“The way this trial has changed my clinical practice is that I have this type of discussion with patients with completely resected lung cancer who are EGFR-positive and we really talk about the pros and the cons because right now we simply don’t know whether this helps cure more patients with resectable lung cancer”, says Dr Schenk.

Surgical resection may not remove every trace of lung cancer.  “What we know about lung cancer is that it has a propensity to recur even with excellent surgeries – not only taking out the tumour but also taking out the lymph nodes in the middle of the chest. Unfortunately lung cancer has a high likelihood of recurring and so one of the main things that we talk about with patients is the use of adjuvant chemotherapy”, explains Dr Schenk.  Adjuvant chemotherapy is part of the SoC for larger lung cancers and those that involve lymph nodes in the chest. It has been shown to provide a survival benefit after surgery, presumably by helping to kill the very small number of residual tumour cells that remain after surgery. “The ADAURA trial is trying to add on to that because even with surgery and chemotherapy, even with no evidence of disease, unfortunately a large number of patients still have recurrence of their lung cancer”, says Dr Schenk. The ADAURA trial is trying to improve those numbers further by adding targeted therapy for a specific mutation.

It is possible for a tumour to ‘escape’ from the effects of a targeted agent. “Right now in the United States osimertinib is the first-line choice for patients newly-diagnosed with metastatic EGFR-positive adenocarcinoma. While the vast majority of patients have a response to therapy, meaning that the disease shrinks and is under control for some time, often years, eventually it does recur”, says Dr Schenk.  The cancer cells are able to develop mechanisms to evade the inhibitory effects of osimertinib. Some of these are known but others have yet to be described.  It is therefore possible that in the ‘curative intent’ setting patients could undergo the surgery, undergo chemotherapy if appropriate, and then take  osimertinib for three years and still experience a recurrence of the cancer.  In this situation “one of the concerns is that the lung cancer might no longer be responsive to osimertinib because the cancer was able to determine a way around that therapy”, she says.

Many oncogene-driven lung cancers, such as those with the EGFR mutation, have a propensity to develop brain metastases or they are present at the time of diagnosis. In the ADAURA trial “there were fewer CNS recurrences with the osimertinib and that would also be a result that is expected because osimertinib is able to get into the tissue of the brain, it’s able to penetrate the blood brain barrier (BBB) so that it is able to exert its anti-cancer effects in that area as well”, says Dr Schenk.