IV non-opioid analgesics – their role in multimodal analgesia and ERAS 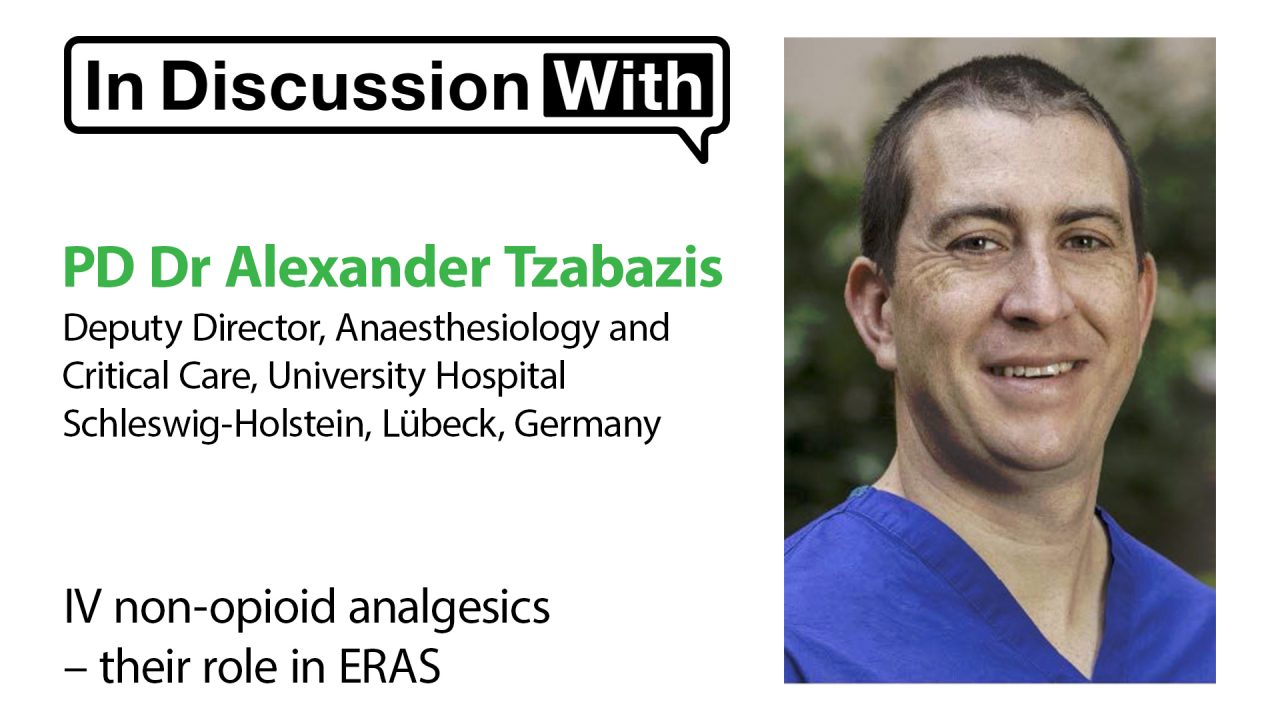 Enhanced recovery after surgery (ERAS) offers many advantages including early functional recovery and reduced exposure to opioids.  In this series of short videos Dr Alexander Tzabazis, Deputy Director of Anaesthesiology and Critical Care at the University Hospital of Schleswig Holstein, Germany describes the role of IV non-opioid analgesics in ERAS.

The goal of ERAS is to reduce perioperative complications and to achieve functional recovery as fast as possible – but not at the cost of additional complications. “We want to get the patients out of the hospital in better shape than they would be after a traditional approach but that does not necessarily mean we need to get them out of the hospital faster than usual”, says Dr Tzabazis.

He explains: “you really need to tailor your approach to your individual patient and to the type of surgery that this patient is having”, he explains. For example, if a patient is undergoing major abdominal surgery with a big mid-line incision, the traditional approach [of] placing in a pre-operative epidural catheter is still valid. “However, we are now increasingly using a multimodal pain approach where we add IV or oral analgesic drugs as well and that is not only opioids but also increasingly non-opioids.  Some people have called this a ‘maxi-modal’ approach where we kind of try to … mix together all the different analgesics that we have available ….. to reduce side effects [compared with] one single medication.”

In view of the opioid crisis, it is important to try to reduce opioid requirements in the immediate post-operative period and also in the long-term post-operative period. A review article by Blumenthal in 2019 described a study comparing a historical pre-ERAS cohort with a post-ERAS cohort for four different types of surgery, including colorectal and obstetric/gynaecologic surgery. It showed that “you could actually reduce postoperative morphine equivalent requirements dramatically – by as much as 80 percent; …… that’s huge – in the post-operative period without compromising patients’ well-being or complications”, says Dr Tzabazis

Both paracetamol and non-steroidal anti-inflammatory drugs are well absorbed when given orally but intravenous administration offers advantages in the peri-operative period. “If you want to time the onset of action of your non-opioid IV analgesics you need to give them intravenously – that’s common sense”, he adds.

Multimodal analgesia is now the standard of care for post-operative pain relief and it can readily be explained to patients.  Dr Tzabazis uses a food analogy. He says, “If you’re hungry you can fill yourself up with potatoes or rice only, but if you ….. add a little ingredient here and there you can be filled up too, but it tastes a lot better, and that’s something patients usually understand really well”.

In practice, he uses the ‘WHO top-down’ [pain ladder] approach. This involves the use of “strong opioids in the immediate post-operative period but usually at a slightly lower dose than I would have used in the past and then I add ….  non-opioids because of the opioid-sparing effect that has been well established…..  From there on I’m trying to taper it down – the opioids first”, he explains.

The availability of intravenous formulations of non-opioid analgesics – paracetamol and ibuprofen – has made it much easier for anaesthetists to administer them in the post-operative period “with a guaranteed onset of action at the chosen time point”, says Dr Tzabazis. “I think if you if you’re still using an opioid-only-based post-operative pain management approach you’re a dinosaur”, he adds.