Multimodal analgesia – the standard of care 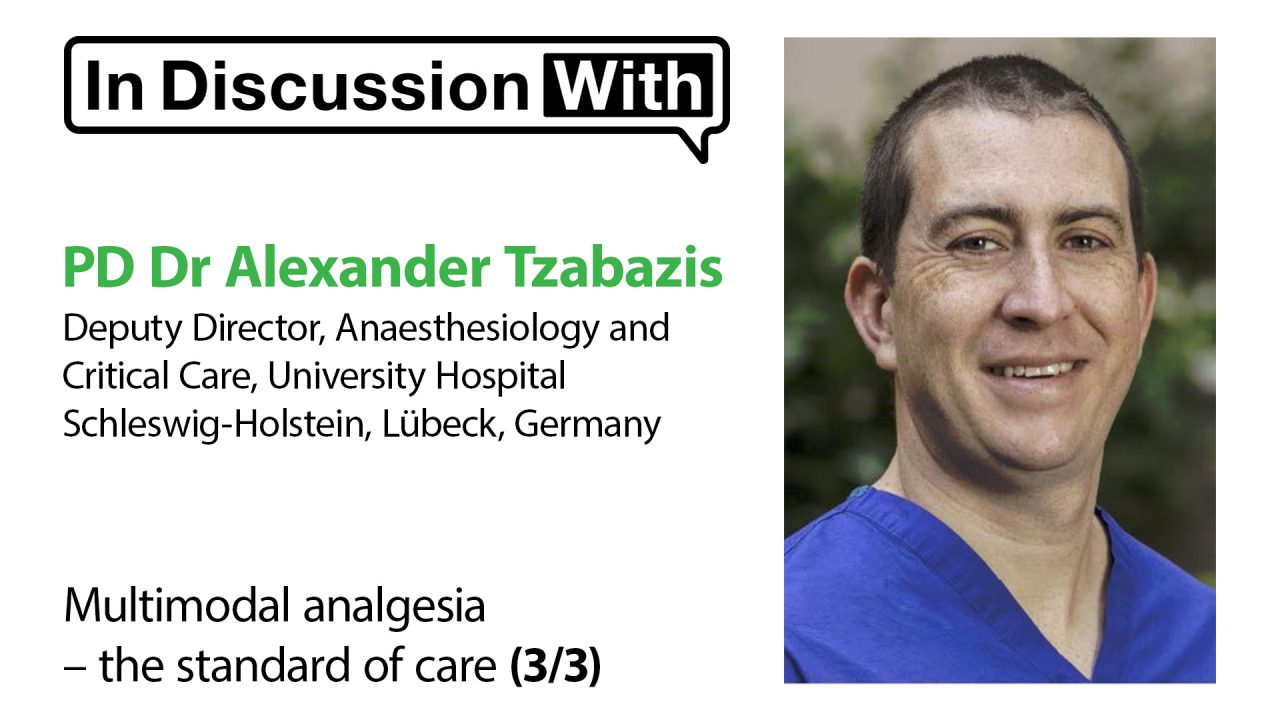 Multimodal analgesia is now the standard of care for post-operative pain relief and it can readily be explained to patients, says Dr Alexander Tzabazis, Deputy Director of Anaesthesiology and Critical Care at the University Hospital of Schleswig Holstein, Germany.

The combination of analgesic approaches used depends on the type of surgery and the individual patient. “Pain is very individual so you need to always have an individual approach but whenever you can use a regional approach or when whenever you can block a nerve that that …… innervates the area of interest you should probably go for that.  Personally, I use the ‘WHO top-down’ [pain ladder] approach where I … add strong opioids in the immediate post-operative period but usually at a slightly lower dose than I would have used in the past and then I add ….  non-opioids because of the opioid-sparing effect that has been well established…..  From there on I’m trying to taper it down – the opioids first. Hopefully I can have my patients well-controlled with the pain with just a regional approach – if there’s a catheter in place – plus non-opioids.  Then, eventually, the regional approach or the catheter needs to come out and hopefully at that time patients can be managed without any opioids and only non-opioids are being given”, explains Dr Tzabazis.

Transdermal fentanyl has been used in some centres as part of the post-operative pain relief protocol. Dr Tzabazis says there are several reasons why this is not desirable. He says, “It would not be my first choice really because the [absorption] kinetics [are] just so slow, I mean, you put it on and you know after so many hours you might have an effect or not. There’s the additional disadvantage [that] the drug uptake depends upon skin perfusion. You know, it’s not uncommon for patients to get a little hypothermic during surgery but at the same time we sometimes apply forced air warming which …. might cause hyperaemia and hyperperfusion of that particular area so the uptake might be higher than you would expect. So, this is not this is not a great choice for post-operative pain.” Furthermore, there can be pain ‘peaks’ when the patient starts moving around and it would be difficult to manage this type of pain with a transdermal approach. Transdermal fentanyl is probably better suited to the management of a chronic pain. “For post-operative pain I would say that’s a no-go”, he concludes.

Multimodal analgesia is now the standard of care for post-operative pain relief. The availability of intravenous formulations of non-opioid analgesics has made it much easier for anaesthetists to administer in the post-operative period “with a guaranteed onset of action at the chosen time point”, says Dr Tzabazis. “I think if you if you’re still using an opioid-only-based post-operative pain management approach you’re a dinosaur”, he adds.

When explaining multimodal analgesia to patients Dr Tzabazis uses a food analogy. He says, “If you’re hungry you can fill yourself up with potatoes or rice only, but if you ….. add a little ingredient here and there you can be filled up too, but it tastes a lot better, and that’s something patients usually understand really well”. This is consistent with the evidence-based approach aiming for the common goal of well-controlled pain management, he adds.