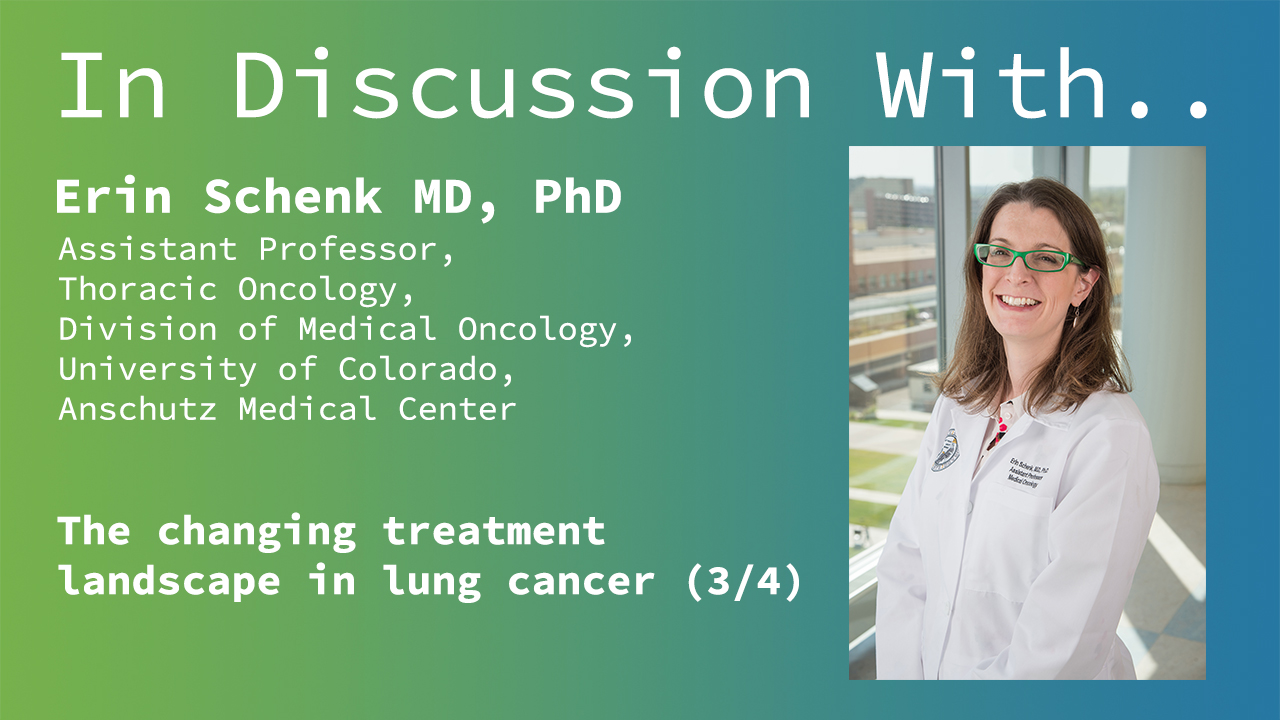 Dr Schenk now has a number of patients under her care who receive pembrolizumab alone and whose lung cancer is probably not going to recur.  “They have no evidence of disease and they’ve been on it for several years. It’s really incredible – that is not how it was [in the past]”, she says.

Dr Schenk identified two sets of trial results to be presented at the World Conference on Lung Cancer (January 2021). Again, they reinforce the importance of biomarkers in this field.

The CODEBREAK 100 trial involves the KRAS inhibitor, sotorasib. KRAS has been recognised as an oncogenic driver in lung cancer for more than 40 years and there have been ongoing attempts to find a drug to inhibit KRAS.  KRAS is found in 12-13% of patients with adenocarcinoma of the lungs. A number of KRAS inhibitors are being used in clinical trials at present. “This is exciting because it appears that we are starting to get signals of efficacy from this drug even in the phase 1 trials”, says Dr Schenk. At WCLC, presentation of the phase 2 data for sotorasib is expected. “This will give us a better idea of response rate and duration of response as well as some of the side effects and adverse events”, she adds.

The Lung Cancer Mutation Consortium (LCMC)3 trial of neoadjuvant atezolizumab represents a new approach. In this trial atezolizumab – a PD-L1 inhibitor – was given to patients before they underwent resection of their lung cancers. The hypothesis was that giving immunotherapy before surgically resecting lung tumours would help to drive better outcomes.

“The hope is that the immune system can be activated to start eliminating some of the cancer cells. I am really excited about this because I think that neo-adjuvant (before the surgery) immunotherapy either alone or in combination with chemotherapy is going the be the next breakthrough for our patients with lung cancer and I am hopeful that this will result in more cures of patients up front so that we have fewer patients with metastatic disease”, explained Dr Schenk. LCMC3 is expected to report its primary analysis of outcomes and safety.

The use of neo-adjuvant therapy is likely to increase in future. Dr Schenk says,

“It is exciting to see all these therapies that were new to all of us not that long ago really making these leaps further into curative intent therapy.  Right now in the US we use durvalumab. If patients have unresectable stage 3 lung cancer they get concurrent chemotherapy and radiotherapy and then we give them a PD-L1 inhibitor, durvalumab, for a year and that has significantly increased cure rates for that population of patients. So, hopefully, moving it to an even earlier stage, where patients are able to have their cancer resected, this will result in even better outcomes.”