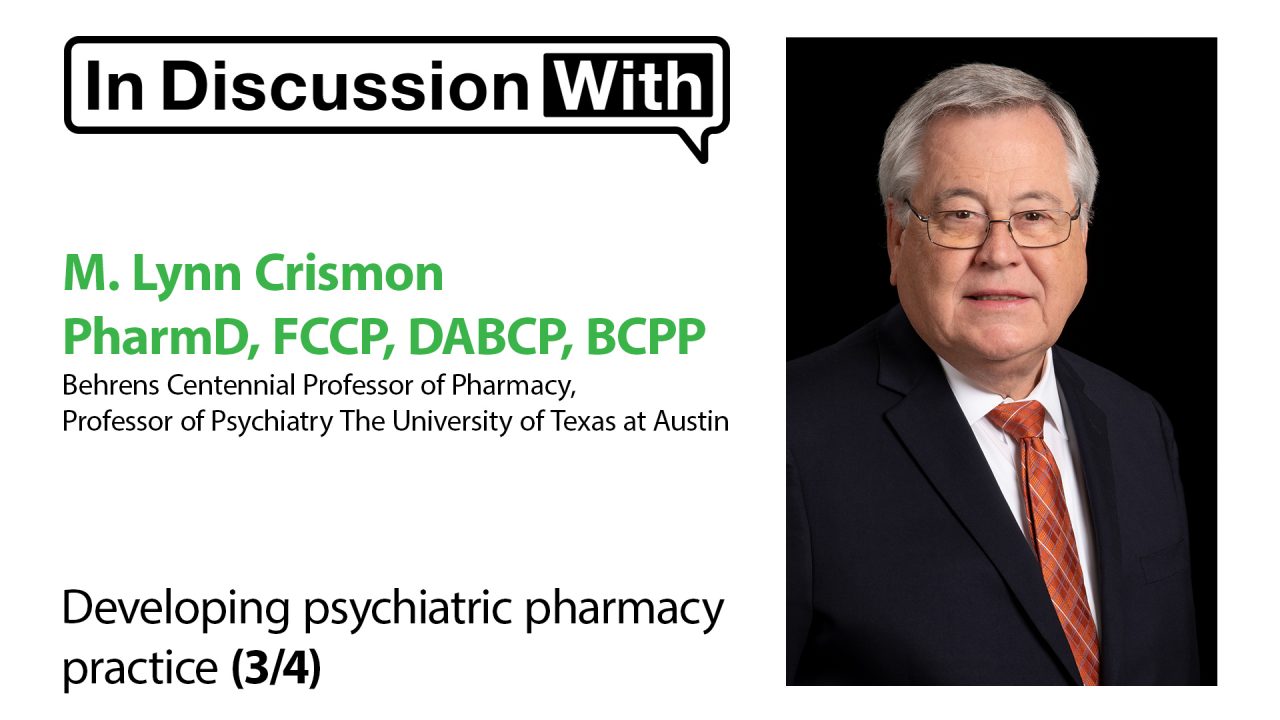 A request from the medical director to review the prescribing of psychotropic drugs in a small hospital serving the Navajo population stimulated a career interest in psychiatric disease and its treatment for Professor Lynn Crismon.

After completing his residency training Professor Crismon was transferred to a 35-bed hospital in Winslow, Arizona that served the Navajo population. There was no psychiatrist on the entire Navajo reservation and patients had to be sent to a town some 60 miles away if a psychiatric consultation was required. Such patients would be followed up in the out-patient clinic by social workers.

He recalls, “Our medical director came to me – I’d maybe been there six weeks or so – and he said, “I feel really uncomfortable with the psychotropic prescribing – I don’t know anything about it. You know, the social worker is sort of looking over this stuff after the meds are prescribed by the consultant – I want you to review and approve all the prescriptions for psychotropics””.

Equipped only with limited knowledge of psychotropic pharmacology he started reading avidly. “I started interacting with the patients and became really fascinated by the disease states and how they how they affect people and how they affect people’s lives and, in particular, at that point in time, with the disease schizophrenia and just the devastating impact that it has on people’s lives”, he says. About 85 percent of people diagnosed with schizophrenia have a lifelong disease and, although treatments have improved, they are still far from perfect, he adds.

His experiences stimulated his interest in psychiatry and also taught him that “you don’t need fancy buildings and expensive technology to provide good health care, you need people that really care and are committed and I also learned the importance of interdependency and relying on one another – and really learned about team-based care before it became a fad”, he says.

Professor Crismon played a leading role in the development of psychotropic prescribing parameters for children in foster care. Such children typically come from impoverished families have a higher incidence of emotional and mental problems.

Professor Crismon explains, “There were a number of journalist investigations of inappropriate prescribing and, in fact, one of our state agencies started looking into the prescribing through the state Medicaid program …… and there was a real problem with just way too many medications being used in children at the same time, sometimes as many as eight and ten and twelve medications”.

In 2003, in Texas, a task force was established to examine the problem and make recommendations for improvement.  “I was on that task force and one of the recommendations was that we put together a multi-disciplinary committee to develop prescribing parameters for children that were in foster care. We released those in 2005 and we’ve updated them every two or three years since then”, he says.

In 2019 the scheme was expanded to include all children receiving mental health services through the state Medicaid program. “We saw over time that that the use overall of psychotropic medications decreased. The use of drugs within the same therapeutic class – the same mechanism of action – decreased as well as just the total number of medications. Now with all the stresses during covid that’s tweaked up a bit but it’s still much, much lower than it was when we rolled this out in 2005”, he says.