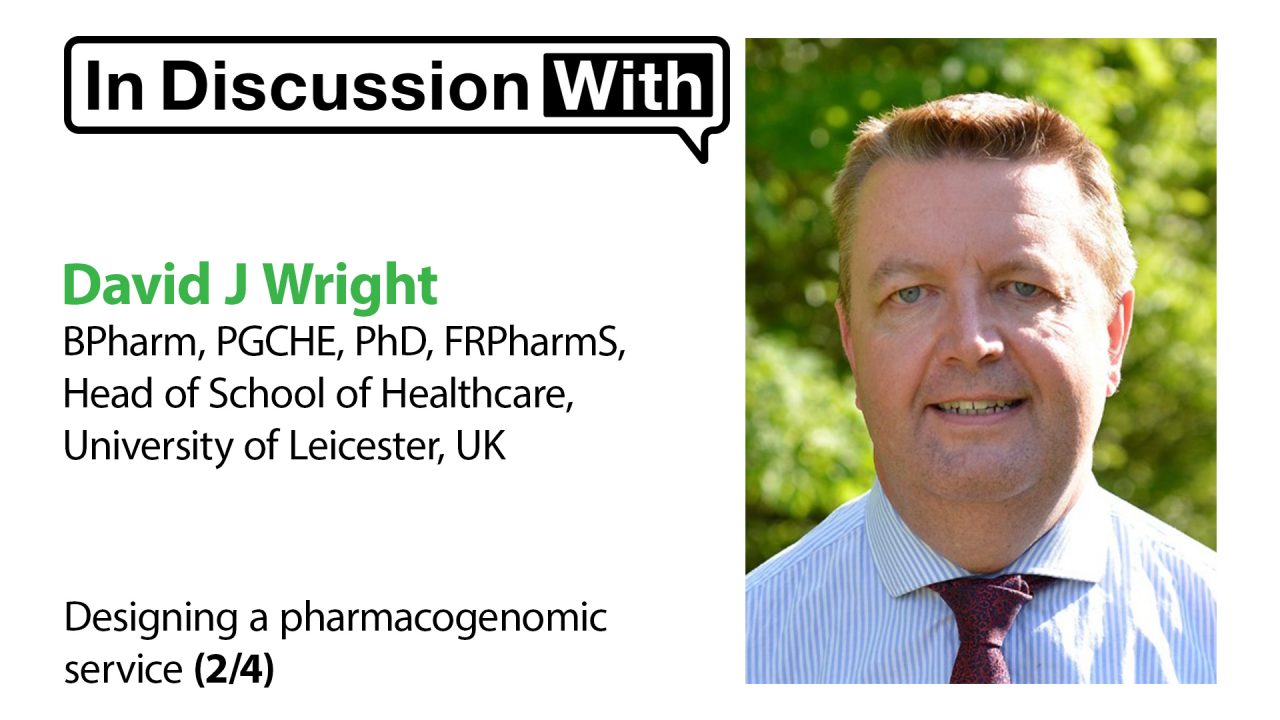 The process of designing a pharmacogenomic testing service for Community Pharmacy was described in a poster presented at the 80th FIP World Congress in Seville. David Wright, Professor of Health Services Research at the University of Leicester explains what was done and some of the issues that had to be addressed.

The poster described work that was led by Tim Rendell, Head of Pharmacy for Day Lewis Pharmacy.

The MRC guidance on evaluation of complex interventions calls for collaboration between all the stakeholders in order to design and test a realistic intervention. In this case pharmacists, patients and GPs were invited to participate.  There was no disagreement that the service should be offered by community pharmacists, recalls Professor Wright. Both pharmacists and GPs said they had little training in the field and felt that they lacked knowledge about the technology and the underpinning science. However, “they recognised the benefits when they realised that this would mean that patients didn’t come back so often because they were given the right drug the first time and they were less likely to suffer side effects”, he says.  The group did not immediately realise that five patients would need to undergo testing to identify one actionable drug-genome interaction. Nevertheless, “there was clear positivity about the idea and the technology and also about the community pharmacies doing it”, he says.

Community pharmacists were concerned about time, space and the appropriateness of their consultation rooms for doing DNA testing. In fact, the test involves only a simple swab inside the cheek, often done by the patient. “It is simpler than a covid test”, notes Professor Wright.

“You do need to sit down with the patient and talk to them about what this means -what’s going to happen to their DNA, what’s not going to happen to the DNA. More importantly, reassure them what the result means”, he says. In the event of a positive result there could be another 50 medicines listed that a patient might receive in the future and it is important to make the patient aware of the risks and the importance of keeping the list for reference. “The test gives you information for life”, he emphasises.

During a visit to another country “I found that doctors were ordering the test more than once for the same patients. Your DNA doesn’t change”, says Professor Wright. This showed a lack of understanding of the technology and underlined the need for training.

Study participants also raised the importance of presenting the results in a way that they could be used and safe storage of data. In addition, the group recommended a ‘soft start’ on a small scale before rolling the scheme out this out on a large scale.

As a result of this work, it has been possible to design a training package for community pharmacy. It was clear that a properly integrated service needs to be set up from the beginning. There has to be agreement on how information will be communicated, which patients will be involved and how doctors and pharmacists will respond to the information received. “What we have learned is we don’t need to teach the science. We don’t need to go down to the detailed level. What we need to do is make sure they know how to respond to it and to treat the patient not the result”, he says.

The purpose of the training is to give community pharmacists the confidence to offer the test and the confidence to respond appropriately to it. “It’s not about them needing to understand exactly which base pairs in the DNA are different and why those base pairs cause this change in metabolism further down the route. Unfortunately, a lot of the training is focused on that. …….. It’s all about confidence. it’s all about demystifying the very clever, very complex science for the healthcare professional and for the patient so we make the right sort of decisions”, he concludes.

He also holds the position of Professor of Clinical Pharmacy at the University of Bergen, Norway.