Making effective use of pharmacists and improving access to treatment 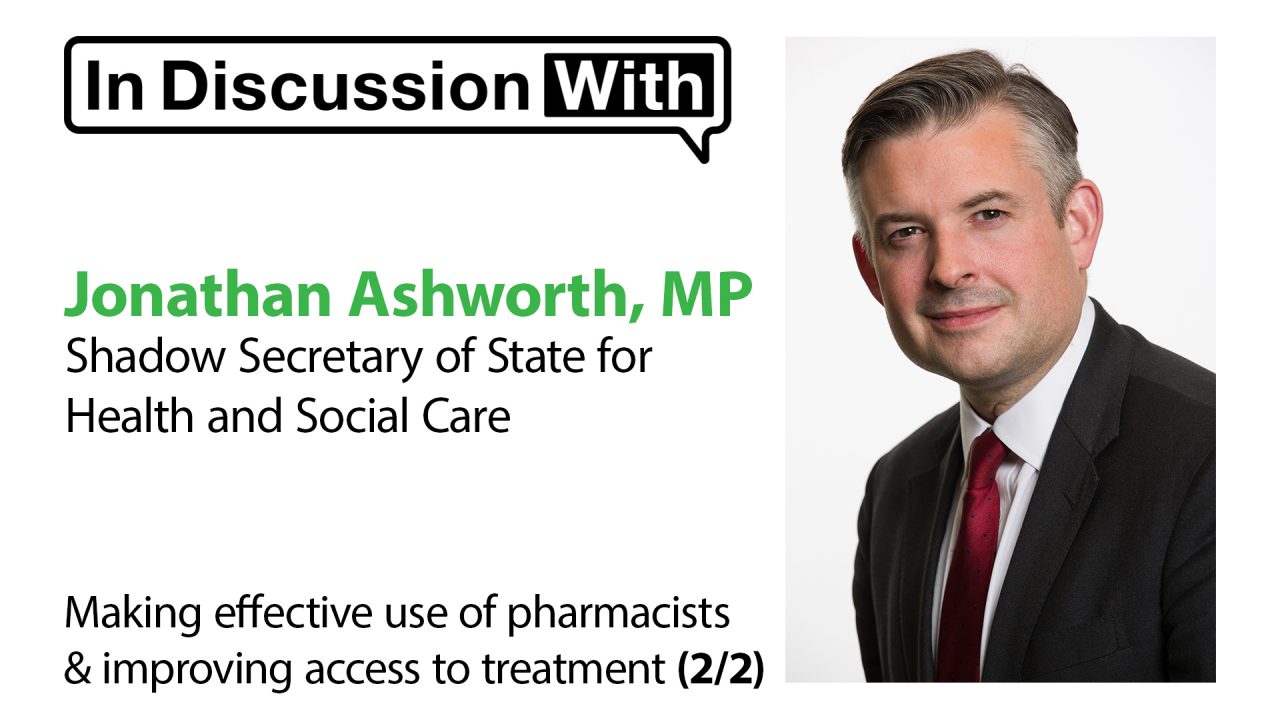 Inviting your MP to spend a day shadowing your work is a good way to raise awareness of the critical work that pharmacists undertake in the healthcare system, according to Jonathan Ashworth, Shadow Secretary of State for Health and Social Care.

Increasing the numbers of pharmacist independent prescribers in primary healthcare would be one way to improve access to medicines and allow doctors to spend more time with patients but other measures could also help.

Jonathan Ashworth says, “First of all, on repeat prescriptions, in this era of modern technology there should be no reason why we cannot have a greater role for community pharmacists. Community pharmacists build up a rapport and an understanding of their patients in the same way the GP does and I found this very directly here in Leicester ….. where it’s often the community pharmacist, who can speak Gujarati, Punjabi and Urdu, who’s got very close relations particularly with older patients who ……. sometimes find it easier to speak in Gujarati or Punjabi rather than English. So there’s a very strong bond and relationship between the patient and the pharmacist and I see no reason why the pharmacist cannot have a greater role in repeat prescription management”.  Furthermore, the recent Lancet report on the future of the NHS1 also talks about using  technology to allow electronic prescriptions to be repeated, he adds.

Regarding deregulation of medicines [reclassification POM-to-P] he notes that such decisions need to be clinically driven and adds that “As a principle I can see the merit of it and I would want to look at what the possibilities are on that front”.

Mr Ashworth takes a keen interest in the training of health professionals at the two universities in Leicester. He says, “I know how important it is to encourage people to train to become pharmacists. We would want to look at how we can make that easier [with] proper financial support for potential students but also for universities”.

There is currently a shortfall of 210,000 health and social care staff and even more staff will be needed in future to cope with the demands of an ageing population.

Mr Ashworth says, “We are going to need as a country to put [a] big investment into workforce development. It has to become a priority and community pharmacy and pharmacists are absolutely key to that because if you need to manage – whether it’s diabetes or hypertension or kidney problems, you are going to need that army of pharmacists in every community”.  This includes both pharmacists working from community pharmacy premises and those based in primary care hubs and GP surgeries, he adds.

Pharmacy education now incorporates prescriber training and from 2026 new graduates will be independent prescribers (IPs) from the day of registration and will be capable of working in multi-professional teams across a variety of healthcare settings. Mr Ashworth foresees important developments in primary care.

He says, “There’s an interesting debate about how you encourage more [people] to think about general practice as an option ……this perhaps is more directed at potential GPs than community pharmacists, although I’d be interested to explore it further. We know, for example, that a potential GP spends a lot of their time training in the acute sector – they might spend a lot of their time doing orthopaedics – even though they want to be a GP. So, why are we training so many GPs in hospitals and not training them in general practice? Now it’s not quite the same with community pharmacy but we’ve got to think about how we make sure that they get proper training as well in the appropriate places, [that] is the broader point I’m making and I’ll be interested to explore that further with the …. pharmacy community

Asked how pharmacy might raise its profile with politicians, Mr Ashworth says that he has found it very valuable to spend time shadowing frontline NHS staff.

He explains that during the NHS reorganisation led by Andrew Lansley (the then Secretary of State for Health and Social Care) about 10 years ago, the minor ailments service was abandoned because Clinical Commissioning Groups (CCGs) decided it was not in their financial interests to fund it. He attributes this to the fact that community pharmacy did not have a proper voice in the system. “If we are moving to integrated care systems I think we’ve got to make sure community pharmacy’s voice is properly heard and they are properly represented in those structures as well”, he says.

Addressing the question of how we fund high-cost drugs in future Mr Ashworth says, “We need to think about what we get in return for the investment that we put in via R & D (research and development).  I’m very much in favour of investment in R & D, by the way, but we need to think about what we get in return and this is going to become ever more vital. I mean, you’ve mentioned drugs, which is quite right, but as we understand more around healthcare data and we know that therapies and drugs and other interventions can be developed on the back of that, we’ve got to make sure that we get a fair deal for the NHS and the taxpayer. …… We could have a day-long seminar on how we reform that – but that’s something we’ve obviously got to think about”.

Anderson M et al.  LSE–Lancet Commission on the future of the NHS: re-laying the foundations for an equitable and efficient health and care service after COVID-19. Lancet 2021; 397: 1915–78