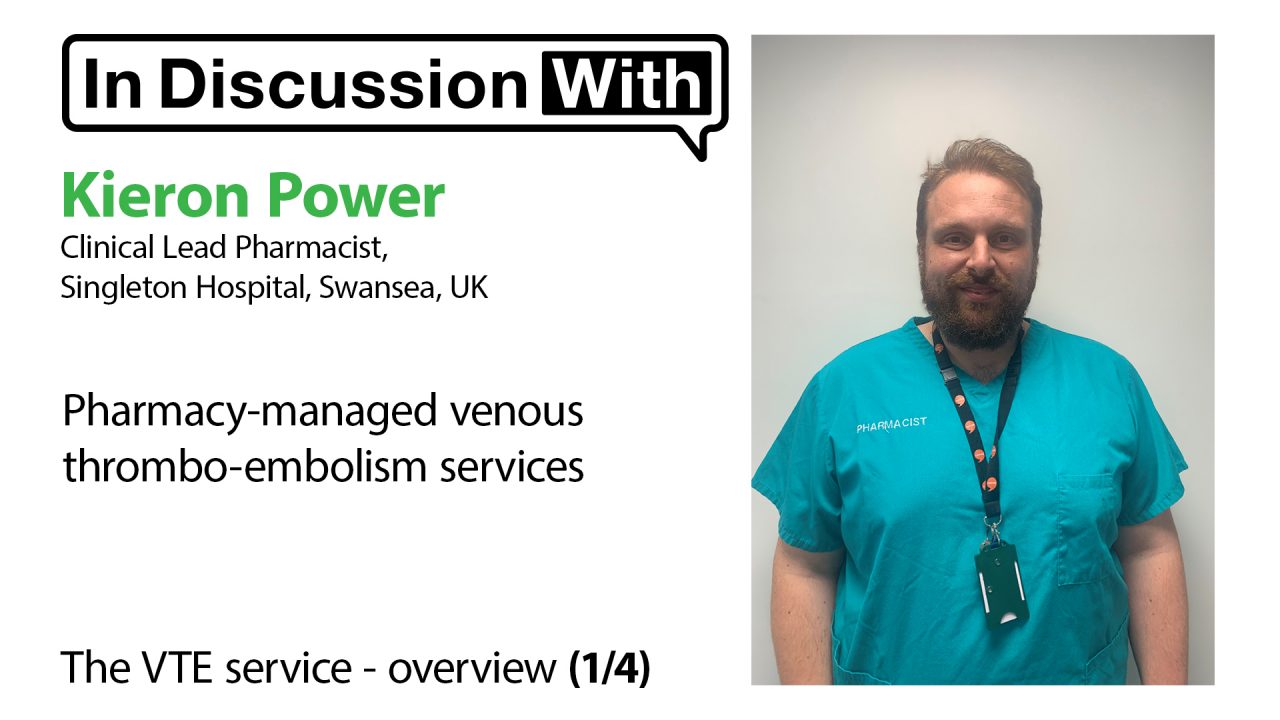 Specialist pharmacists are now the primary clinicians who look after patients with venous thromboembolism (VTE) at Singleton Hospital in Swansea. IMI spoke to Mr Kieron Power, Clinical Lead Pharmacist – Thrombosis and Anticoagulation to find out more.

Mr Power is responsible for leading, directing and overseeing the ongoing development of the VTE service at Singleton Hospital. He also has a hands-on role in the day-to-day operation of the service and runs a weekly haematology clinic for review of patients with complex thrombosis and anticoagulation issues.

The VTE service has grown steadily since pharmacists were first asked to assist with warfarin dosing for the ambulatory VTE service. This involved supporting patients “to get into [the therapeutic] range before being referred on to warfarin dosing clinics”, explains Mr Power. As warfarin usage diminished and was replaced by direct-acting oral anticoagulants (DOACs) the pharmacy team began to take a more prominent role in VTE management – and the service has continued to grow and develop.

“Over the past couple of years we’ve evolved our service so that we’re now the primary clinicians who look after VTE in the health board. What I mean by that is once the patient ‘s been diagnosed with a VTE, they get passed to us for a same day appointment where we will initiate therapy and the patient then will be under our care for the duration of their management until we make a decision at the at 3-6 month point and then we either stop the anticoagulant therapy or refer them on to primary care”, say Mr Power.

Whereas many pharmacy-led anticoagulation services are focused on stroke prevention in patients with atrial fibrillation (AF), the service at Singleton Hospital is VTE-focused. Mr Power attributes this to its historical origins and, more recently, to the complexity of VTE management. “I think there’s far more complexity in VTE management than there is in AF management when it comes to anticoagulant therapy – mainly because I think there’s a lot of supporting algorithms in terms of AF management whereas [in] VTE there’s a lot more variability in the type of patients you see, there‘s a lot more decision points t o undertake as you go along and, as such, it became an area that I thought worked very well with pharmacist independent prescribers – and as our interest grew the service grew with it”, he says.

VTE is estimated to affect one-two patients per 1000 patients each year in Europe. There are immediate risks and there can also be long-term complications.

“I think the complexity of management is also far more than people realise. It’s not a case of where we used think maybe we would just treat people for three to six months with anticoagulant therapy and that would be that. We’re now far more interested in long-term risks of recurrence [and] long-term complications, explains Mr Power.

One of the main benefits of the service for patients is consistency of decision-making and management, he says. “There are three of us currently who run the service as independent prescribers; most patients will see one of the three of us…….. we have a very tight system whereby all of these processes are undertaken and so that they can rest assured that once they’re under our service they will have all of those management decisions undertaken under one roof.