Risk factors and triggers for delirium 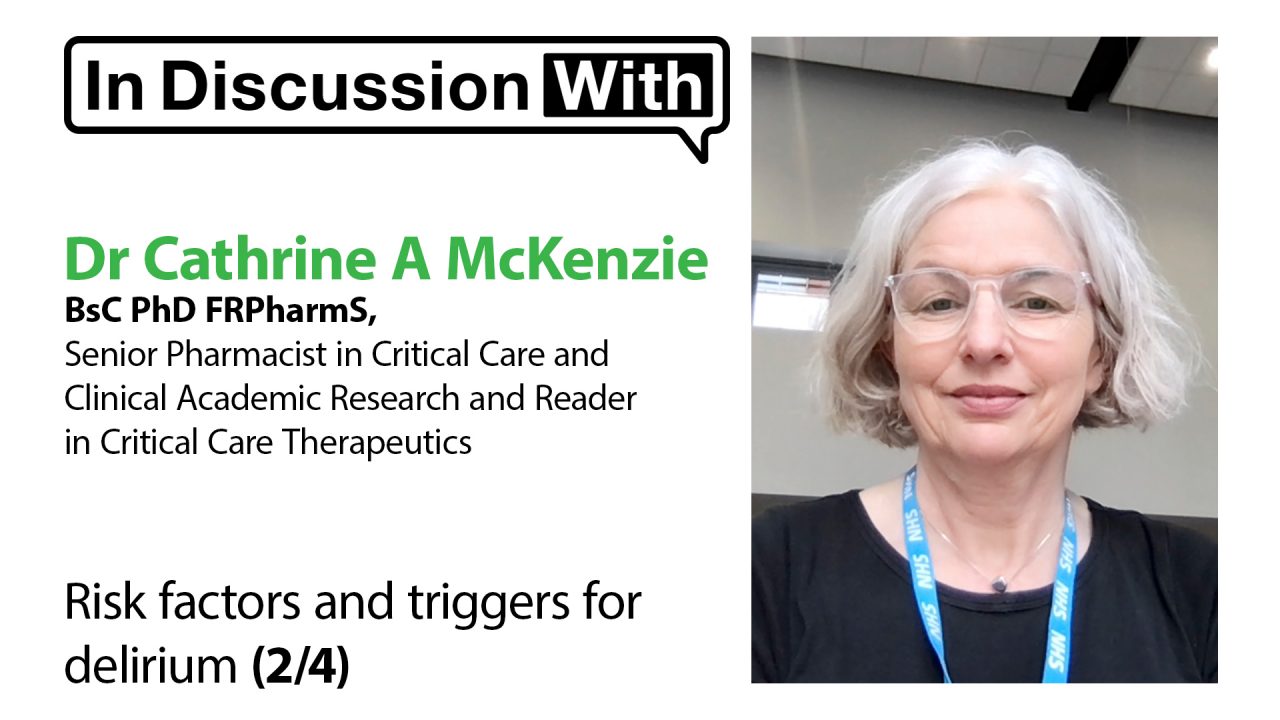 Older age is probably the biggest risk factor for delirium. This could be because the blood brain barrier deteriorates with age and noxious substances are more likely to penetrate the brain. “Severe infection, sepsis and septic shock can often present with delirium. There’s a bit of a confusion in the language in that some of the sepsis language calls it encephalopathy but actually there’s a lot of overlap between both”, says Dr McKenzie.  Alcohol dependency can also be a risk factor. “Patients who are alcohol-dependent come into the ICU and develop delirium are much more challenging to treat”, she says.  Another factor can be a genetic predisposition to dementia. Such patients may be “on the pathway to developing dementia” and, for example, already be attending a memory clinic.  Ischaemic heart disease can also be a risk factor. “Delirium is very common on cardiothoracic wards, in cardiac areas and …. we think that’s because part of the challenge in delirium is atherosclerosis in our great vessels and our brain and associated neural inflammation”, explains Dr McKenzie. Intensive care clinicians believe that statins could be helpful here. “we think they work but the evidence is still lacking”, she adds.

In recent years there has been a growing understanding of the role of the total “anticholinergic burden” in the development of delirium. “In the simplest terms, the higher the anticholinergic burden the greater the risk of delirium, constipation, confusion, falls and, actually, if you expose yourself to these drugs for long periods of time you can actually develop dementia”, says Dr McKenzie.  The most well-known drugs are oxybutynin and solifenacin which prescribed for management of urinary incontinence. A GP colleague recently told Dr McKenzie that, in practice, it is difficult reduce the use of these drugs because patients who are taking diuretics refuse to stop oxybutynin and solifenacin because control of continence is more important for them. Oxybutynin and solifenacin both have pronounced anticholinergic effects but “what will often happen is patients that are on a number of medicines that have a low risk, but added together is a high risk – and that’s why polypharmacy in the elderly increases massively this anti-cholinergic burden”, she says.  Reducing the anticholinergic burden reduces the risk of delirium.

A high anticholinergic burden can become apparent in the acute setting as falls or constipation. Dr McKenzie says, “I work partly on the neuro-ICU and I’ve seen some patients recently coming in with subdural hematomas which are … as a consequence of quite drastic falls and they’ve been on three or four drugs with this high anticholinergic burden. This is more of a risk for our older patients and we think this is again because of the blood-brain barrier being less intact so the risk is higher. …..Classic drugs of course are like those like Nytol (diphenhydramine) …  they have a massive anti-cholinergic burden. So, they’re great in the short term – they help us sleep – but in the longer term in the elderly patients they are a risk”.

Dr McKenzie emphasises that often the drugs that contribute to the total anticholinergic burden are not being used for their anticholinergic effects, as such, but have these effects as part of their pharmacological action. She explains, “These anti-cholinergic effects are not immediately noticeable. A very recent one I noticed was olanzapine, actually, and in fact people …. who work in ICU will recognise that actually we use … olanzapine to treat delirium. It actually has a reasonable anticholinergic burden so there’s not much evidence that it actually helps delirium but there’s even more evidence showing now that it …may trigger it”.

Dr Mckenzie expects that there will be increasing amounts of information about the anticholinergic burden and it will be important to keep patients informed of the risk.  Another group of drugs that gives cause for concern is compound analgesics, such as cocodamol, with high amounts of codeine.  Used on its own in elderly patients it is likely to be tolerable but when added to oxybutynin or promethazine “that’s a very high anticholinergic burden and that will massively increase the risk of confusion, delirium and falls”, she says.