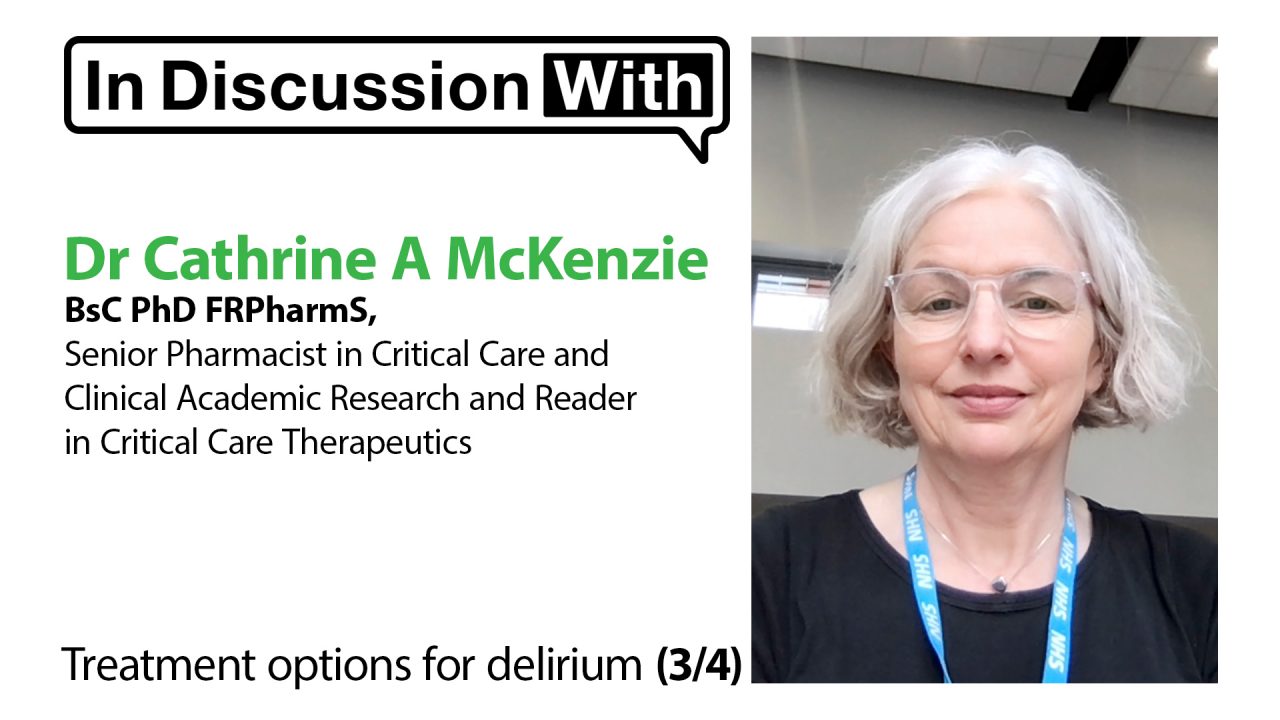 The number of pharmacotherapies for delirium is “disappointingly low”, but a number of other measures can help and research into new and repurposed treatments is under way, says Dr Cathrine McKenzie, Senior Pharmacist, Critical Care.

“When we first started to understand about delirium, we thought it was a neurotransmitter problem so we searched among our dopamine antagonist agents which, of course, are the antipsychotics, and they are used so very commonly in the acute sector to treat delirium. Sadly, the evidence for these therapies is lacking for delirium …..I  mean the syndrome of delirium which causes the cognitive decline”, says Dr McKenzie. For patients who have delirium who become very agitated, antipsychotics including haloperidol, quetiapine and olanzapine will have some effect in reducing the agitation but they will not affect the delirium syndrome. In addition, benzodiazepines can be helpful for acute agitation but long-term infusions are believed to be harmful and are avoided. Opioids can also be a cause of delirium, she adds.

“The only group of drugs that have been shown to have any evidence of benefit, I guess, are the alpha-2 agonists. The two drugs that we know in the intensive care unit (ICU) …. are clonidine – of course, it was originally anti-hypertensive, now used in chronic pain and agitation of delirium in ICU – and dexmedetomidine. There’s actually quite reasonable evidence that dexmedetomidine will treat and prevent delirium. What is disappointing for us in ICU is that that evidence was really assessed in patients that were not severely, severely unwell, if that makes sense. It was in patients who were quite severely unwell and they used the dexmedetomidine to prevent them getting worse”, explains Dr McKenzie. The evidence for clonidine is weaker and she is now involved in a study called ‘A2B’ that is comparing dexmedetomidine versus clonidine versus standard care and one of the secondary outcomes is delirium prevention.

She notes that it is “the vulnerable brain”, that is particularly at risk for delirium. “Although, I have to say, we do get delirium in children as well and that’s probably because they’re so unwell. Whether we get the same cognitive decline – it’s yet to be established”, she adds.

There are a number of non-pharmacological therapies which have been shown to reduce delirium although none has been shown to prevent the subsequent cognitive decline. Early mobilisation is one measure that helps and this is why patients in ICU [and] critical care who have undergone, for example, hip replacements are mobilised as early as possible.  Cognitive stimulation is also helpful. This can involve talking to the patients, interaction with relatives, orientation in time and place and, most-importantly, re-establishment of the sleep-wake cycle. “In fact, one of the things in ICU [that] we’re not particularly good at is keeping our patients in a cycle because when they’re acutely unwell we give them infusions of sedatives and opioids and that completely destroys it, of course. So, when they wake up, they’re completely disorientated and when we get them back into a normal regime the delirium prevalence reduces”, says Dr McKenzie.

In intensive care units it is difficult to maintain the normal daytime-night-time rhythm. When patients are acutely unwell, they are not treated in a single room because observations have to be undertaken every hour. “Darkening the room does help.  Interestingly ,…. there’s been a ton of studies looking at melatonin in delirium because instinctively you think it would work but as far as I’m aware there’s no evidence of any benefit”, she notes.

Delirium is “a huge feature in covid-19 and I believe in older patients who develop covid one of the main symptoms is delirium. What we have seen with covid 19 is a prolonged and severe delirium. Now, that’s probably related to the course of the virus. …..  I accept the most recent omicron [variant] is much milder but severe covid was a long illness so we think there are effects of the virus on the brain”, she says. These may be due to the effects of microthrombi in the brain or the effects of neural inflammation that goes alongside. “The latest literature, I believe, is suggesting those with severe covid – there’s about 25 percent of them who have later cognitive decline which is dreadfully sad … if you’re a young patient. …. I’m not saying patients will never recover, you know, there is some evidence that patients will recover but there are accountants who can’t add up, you know, mathematicians who can’t add, people who can’t go back to work, people who you know no longer pursue a full and independent life. ….  I think part of this brain fog, you know, which is a typical sign of long covid …..  is triggered by the acute delirium the patients have had when the disease is worst and this triggers, we think, an inflammatory process in the brain which takes some time to resolve”, explains Dr McKenzie

Dr McKenzie is leading a research group that is exploring the use of intravenous (IV) thiamine (vitamin B1) supplementation in delirium. She explains: “Thiamine diphosphate is the active form of thiamine and it’s an essential co-factor in the number of enzyme systems in the brain. … Our most recent hypothesis is that delirium is triggered by an abnormal glucose metabolism or under-glucose- metabolism and we need thiamine in a number of these enzyme systems, including alpha ketoglutarate and transketolase. We think that we have reasonable evidence to suggest that flooding the brain with thiamine in delirium may reduce its prevalence in ICU. What’s very encouraging is that thiamine is actually very, very safe. In fact, it’s safer than most of the other drugs, as you know, and of course it’s been used in the NHS – many people will remember it’s Pabrinex.  … We don’t convert thiamine to its active form in alcoholism so of course it’s one of our main treatments of Wernicke’s {encephalopathy], so we know that it’s safe. We think that it’s effective; we’re just hoping very much to get funding to undertake a small study to prove that it gets into the brain in delirium and reduces the brain network disintegration, which is essentially delirium, and then finally undertake our large site randomized control study to assess the effects of IV thiamine versus placebo in delirium.”