Delirium and why it’s a problem 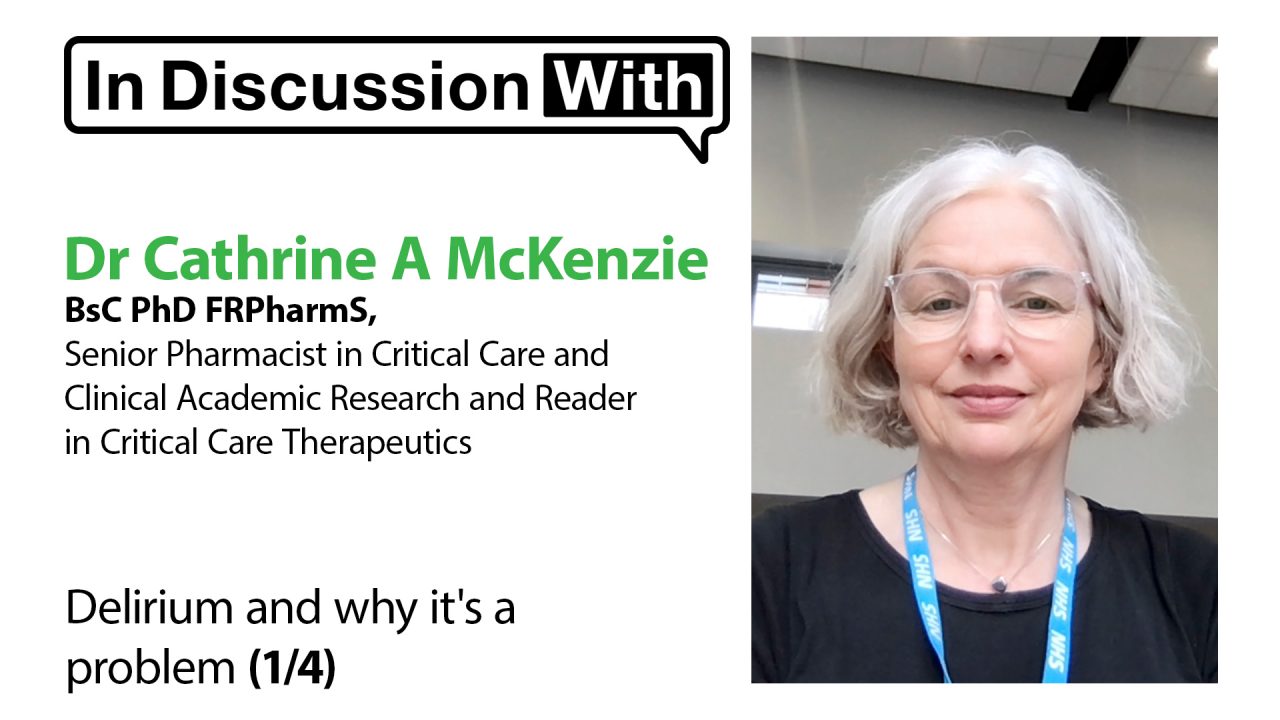 Delirium can affect up to 70 percent of patients in intensive care and is a condition that can have far-reaching consequences. IMI spoke to Dr Cathrine McKenzie, Senior Pharmacist, Critical Care to find out more about the causes, risk factors and treatments for this condition.

As a clinical academic pharmacist Dr McKenzie combines clinical practice in critical care with an academic role in which she both conducts her own research and supports other pharmacy professionals undertaking research.  She has worked for more than 25 years in critical care at the University Hospital of Southampton. Her academic work is based at King’s Health Partners.

Delirium can be described as “an acute brain dysfunction and that’s normally, typically, in response to a pathophysiological trigger, for example, exposure to a medicine or an acute infection or a change in a chronic condition. The key symptoms of delirium are confusion but this presents as inattention, …. so, you might be half way through a sentence and you can’t get to the end – and actually a lot of the screening tools capture this symptom – as well as disorganization in thinking. So we ask patients things like, ”Are there fish in the sea?”,  “Is one pound more than two pounds?”  and you’ll often get the answers confused. And it’s a change in one’s cognitive function from baseline”, explains Dr McKenzie.  “It’s very distressing for our patients, for their relatives and for those that are caring for them”, she adds.

A diagnosis of delirium is important because it is the leading cause of cognitive decline in the acute care setting. Dr Mc Kenzie says, “That’s not just in critical care that’s in acute care. So, a patient that’s in delirium ……. they have a chance of about a third of developing some kind of cognitive decline after their episode [of delirium].  The longer they’re in delirium, the more severe it is, the worse the cognitive decline will be and elderly patients with delirium have a much lower chance of leaving hospital and returning to their own home and leading full independent lives. In addition, it increases our chance of dying, it increases our hospital and ICU length of stay and, as I said, lastly, it’s terrifying for patients, it’s very distressing for the relatives and it’s hugely challenging for those caring for them”.

Delirium is probably triggered by an underlying problem and could be something as simple as advancing age. “Elderly patients, for example, who get urine infections will often not present with a [raised] temperature, they present with delirium. It is not the same as dementia but it is more common in dementia and may be an indication that patient may develop dementia……There’s a lot of difference between having a little bit of cognitive decline, you know, having a little bit of failure memory or remembering things and going [down] the path to having …. severe dementia. …An episode of delirium will hasten that decline markedly”, she explains

In patients in intensive care who are severely unwell, the prevalence of delirium can be as high as 70 percent and even higher amongst those who are mechanically ventilated.  Moreover, when asked about research priorities stakeholders ranked agitation and delirium at number three. “So, it’s a huge problem for us and a research priority for us”, says Dr McKenzie. “That’s a huge challenge and I actually know it has a huge impact, particularly on our nursing colleagues who are caring for these patients, who find care of these patients challenging and seeing the patients in great distress can be …. hugely challenging as well”, she adds.