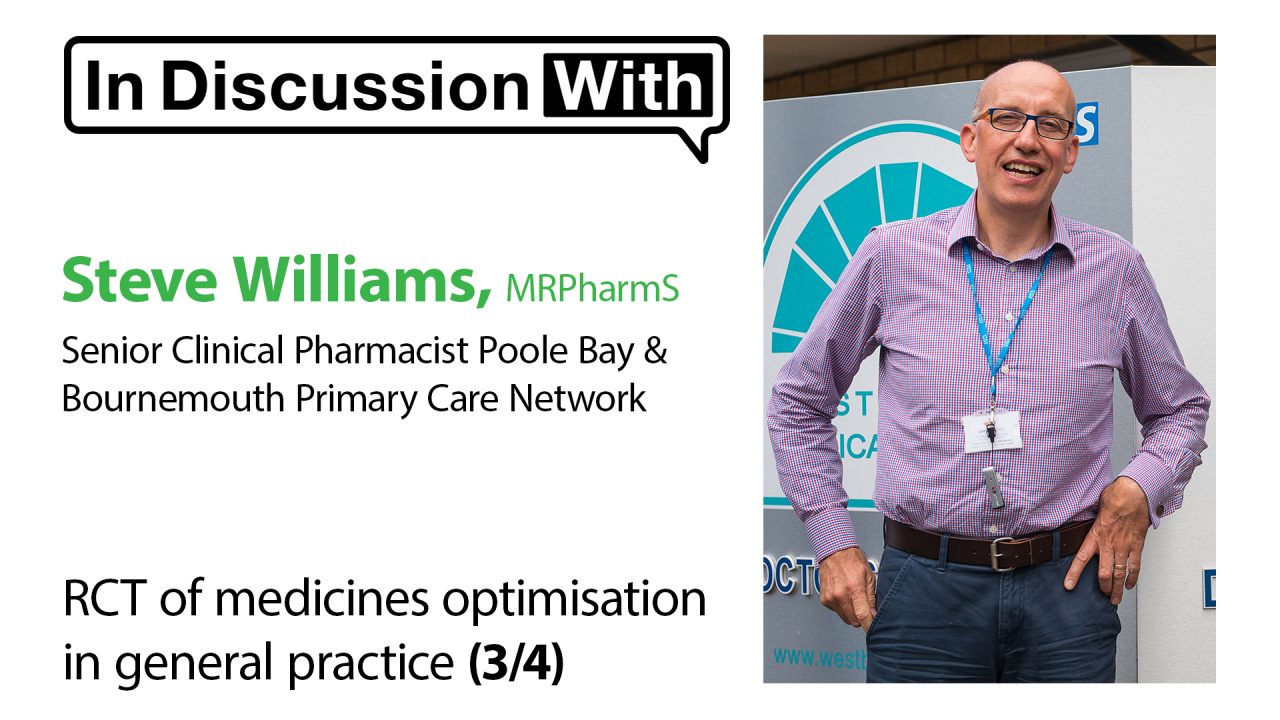 “It was incredibly rewarding but it was a lot of work, but I’m not shy of doing hard work because I felt that [this study] was really important”, says Mr Williams.

The study was run by Professor James McElnay at the University of Belfast and much of the work was undertaken by a PhD student called Nadia Syafhan, Mr Williams recalls. The GP practice in which he works was one of the eight (two in each of four regions of the UK) that took part. The plan was to recruit 800 patients but, in the event, about 350 were included in the study, randomised on to two groups. In the first instance, adult patients were recruited who were taking six or more oral or inhaled regular medicines and who had also had an unplanned hospital admission or two emergency department   presentations within the last year. In addition, adult patients who were prescribed at least 10 regular oral or inhaled, long-term medicines were also recruited. “When I say six or ten medicines, I don’t mean a couple of catheters and a couple of eye drops and some gluten-free breads – I mean proper systemic medicines”, emphasises Mr Williams. The medicines optimisation intervention was essentially a structured medication review, during which a list of medicines-related problems (MRPs) was compiled and the Medication Appropriateness Index (MAI) was calculated. Patients were also asked about their beliefs about medicines and quality of life.  “If you were in the intervention group you saw somebody like me for a structured medication review at month zero, then you saw me at month two and   then at month four and then it was all wrapped up by month six”, says Mr Williams.

The results showed that, as a result of the intervention, the number of medicines-   related problems was reduced. “A lot of that was to do with adherence or adverse drug reactions or people being on inappropriate medicines that were no longer necessary”, recall Mr Williams. The Medicines Appropriateness Index was also significantly reduced.  “Interestingly we were able to show that it reduced the number   of telephone consultations that were made to the practice if you were in the   intervention group”, something that is an important consideration for a busy general practice.  There are almost certainly too many confounding factors to allow a study such as this to demonstrate reductions in the risks of death or hospitalisation, he says.

“I think what this study adds – and this is my personal view – is that if you can increase the quality of life for patients and you can reduce the number of contacts with health professionals then that is a good outcome. I’m not sure whether or not you’re ever going to be able to prove that [the intervention] will increase your life or reduce the risk of you going into hospital”, says Mr Williams. He notes that further trials are planned to look at this issue. In conclusion he says, “It was a fantastic experience and I loved it and of course I still see some of these patients who took part …… it was lovely and it was good to see that it was finally published.