The relationship between autoimmune disease and vitamin D 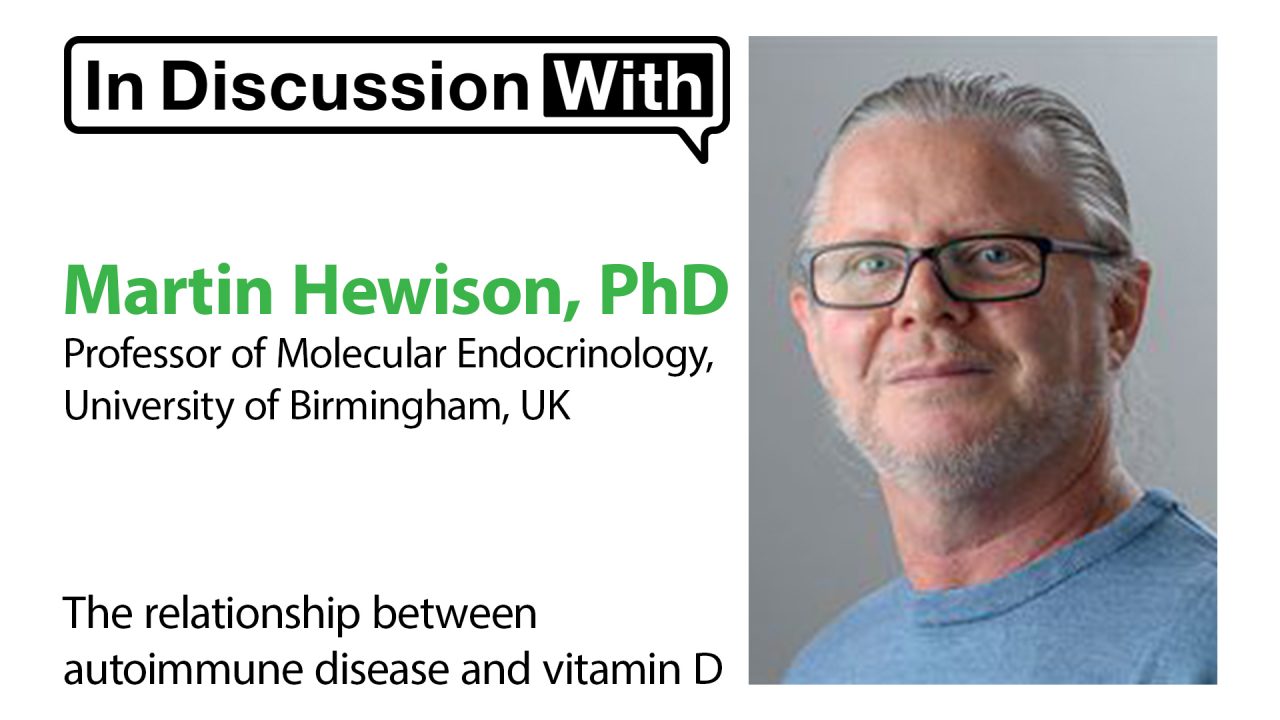 Martin Hewison, Professor of Molecular Endocrinology at the University of Birmingham. For the past 30 years he has been engaged in research into vitamin D ranging from molecular biology to clinical usage. In this series of short videos, he describes the current understanding of this substance, especially its role in the immune system and auto-immune disease.

Vitamin D is produced primarily by the action of sunlight on 7-dehydrocholesterol in the skin. It is metabolised to 25-hydroxyvitamin D (25D) in the liver and then to 1,25-dihydroxyvitamin D (1,25D) in the kidney. This active form of vitamin D acts on distal tissues to promote absorption of calcium and phosphate. This is the endocrine function of vitamin D.

It is now known that many tissues can convert 25D to 1,25D and they also have the receptor for active vitamin D. This includes components of the immune system, such as macrophages and T-cells. Intracrine (within the same cell) responses and paracrine responses to vitamin D underpin a much wider role for vitamin D than was previously understood.

Vitamin D acts in both the innate and adaptive arms of the immune system. In the innate arm it promotes non-specific antibacterial and antiviral responses to infection. In the adaptive arm vitamin D appears to act on T-cells to suppress the normal inflammatory responses to an infection. Although inflammation is a normal response to infection, inappropriate continued inflammation may be at the root of auto-immune disease. It is postulated that if 25D levels are low, then less is available to macrophages, dendritic cells and T-cells, which, in turn, are able to make less activated 1,25-dihydroxyvitamin D (1,25D) and suppression of inflammation by the adaptive immune system is reduced.

Association studies have linked low levels of vitamin D with the presence of autoimmune disease such as type 1 diabetes, Crohn’s disease or multiple sclerosis.

There is, as yet, no universal agreement about the levels of vitamin D that are ‘normal’ and ‘deficient’. However, recent studies suggest that 50 nmol/ml 25-hydroxyvitamin D is a threshold level for deficiency.

Vitamin D deficiency occurs even in sunny parts of the world, such as Saudi Arabia and California, if people have limited exposure to sunlight. People with darker skin (who need more sunlight to produce vitamin D), those who routinely cover their skin and housebound people are at risk of vitamin D deficiency. In addition, people who live in countries in the far North (e.g. the UK) or South of the globe receive insufficient sunlight during the winter months to make adequate amounts of vitamin D. “During the winter months, absolutely, I think everybody should be given vitamin D supplements”, says Professor Hewison.

Striking a balance between sufficient skin exposure to make vitamin D and too much skin exposure leading to the risk of skin cancer is another important consideration. One approach that might help here is fortification of foodstuffs, as occurs in some countries.

A recent prospective study has shown that vitamin D supplementation has a “strongly positive effect” in reducing the incidence of rheumatoid arthritis. This large trial involved nearly 26,000 participants over a five-year period. “Over the first three years there was no real difference between the vitamin D arm and the placebo arm, in terms of effects on prevention of autoimmune disease, but once it went beyond the three years you did see a very strongly significant effect. There’s actually something like a 22 percent decrease …. in the reports of autoimmune disease in these individuals”, says Professor Hewison.

Many people are vitamin D deficient and given the strong link between low vitamin D levels and a wide range of human health issues” and vitamin D is a relatively cheap and relatively safe agent, then there is at least a good rationale behind improving the vitamin D levels for individuals”, says Professor Hewison.