Suffering from psoriasis? Blame this trio of proteins 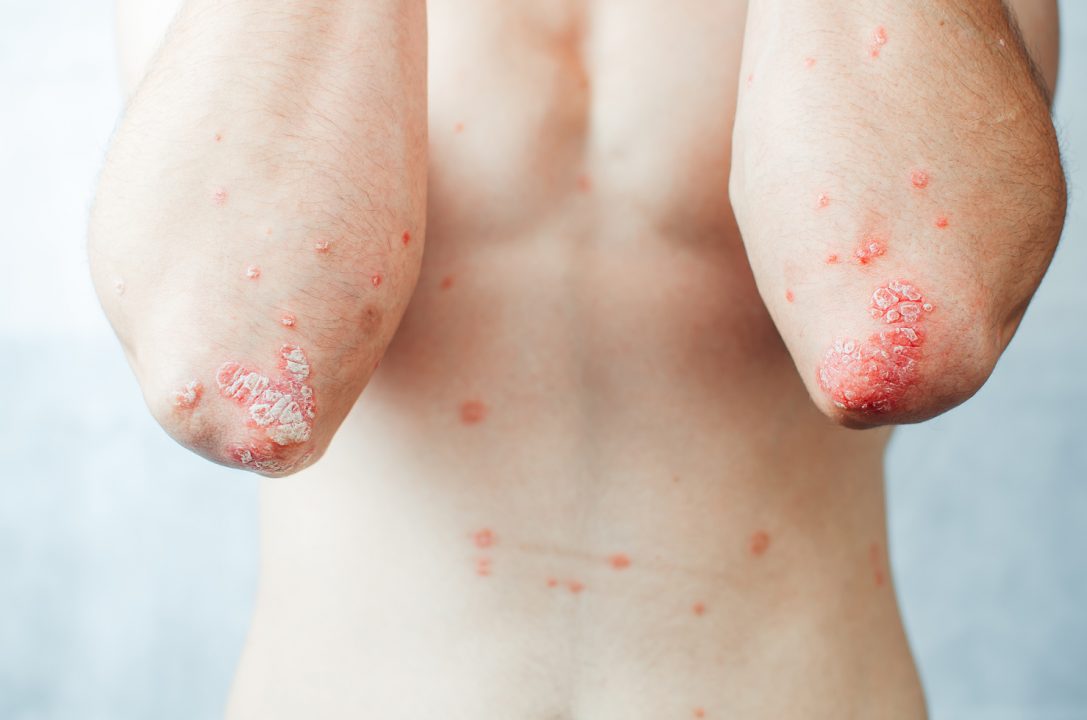 New study shows there may be a way to help even more psoriasis patients.

About 7.5 million Americans suffer from psoriasis, an autoimmune disease that shows up as patches of red, inflamed skin and painful, scaly rashes. Although there are effective treatments for psoriasis, not everyone responds to these therapies — and for many, the relief is temporary.

“These therapies don’t reduce disease by 100 percent, and they don’t cure the disease” says La Jolla Institute for Immunology (LJI) Professor Michael Croft, Ph.D. “And if you take patients off those drugs, the disease almost always comes back.”

Now Croft and his team in LJI’s Center for Autoimmunity and Inflammation have discovered how a key protein called TWEAK damages skin cells in psoriasis patients. Their findings, in mice and with human skin cells, suggest targeting TWEAK may help control the disease

“We think TWEAK might be considered a potential target for the treatment of psoriasis,” says Rinkesh Gupta, Ph.D., a postdoctoral fellow at LJI and first author of the new Science Immunology study. “It’s good to have this chance to develop a new therapeutic option.”

The findings build on the Croft Lab’s previous work showing that TWEAK can interact with the most common type of skin cell, called a keratinocyte. By investigating TWEAK-deficient mice, the researchers found that TWEAK is a driver of inflammation in a model of psoriasis.

The new study shows that TWEAK does not work alone. By studying human keratinocytes, the researchers discovered that TWEAK teams up with two other proteins, called tumor necrosis factor (TNF) and interleukin-17 (IL-17), to trigger inflammation. This trio appears to control the production of inflammatory molecules and the expression of additional inflammation-associated proteins in patients with psoriasis.

“The fact that they work together suggests the disease is essentially driven by all three of those particular proteins at the same time,” says Croft. “The primary implication is that TWEAK will also be a good drug target. as has already been proven for TNF and IL-17.”

To test this, the researchers used a mouse model of psoriasis to compare how well a TWEAK-inhibitor measured up to therapies inhibiting IL-17 or TNF.

The results suggest the team is on the right track. “If you inhibit TWEAK from working on its receptor on keratinocytes, you get the same therapeutic effect as when you inhibit TNF or IL-17,” says Gupta. This finding is especially encouraging because TNF and IL-17 are both FDA-approved drug targets for psoriasis.

Although human clinical trials remain to be done, Croft sees a future for TWEAK inhibitors as therapies for many types of skin diseases. “We think TWEAK is involved in skin inflammation in general,” says Croft.

His lab is now investigating the role of TWEAK in atopic dermatitis, also called eczema, a very common type of skin inflammation, especially in babies and young children. Croft says while psoriasis and atopic dermatitis are distinct diseases, they do have a few things in common — and there are not as many good treatments for atopic dermatitis.

“There’s certainly a lot of room for improvement in treatment of atopic dermatitis patients,” he says.

The study, “TWEAK functions with TNF and IL-17 on keratinocytes and is a potential target for psoriasis therapy,” was supported by the National Institutes of Health (grant AR072640).