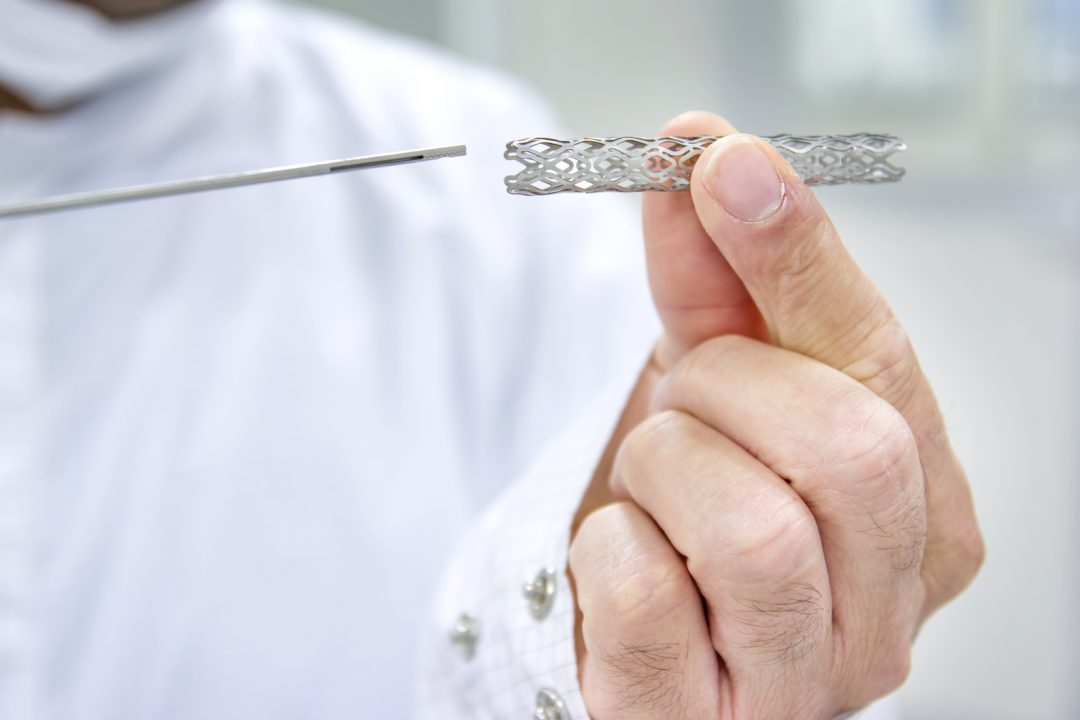 Inspired by kirigami, the Japanese art of folding and cutting paper to create three-dimensional structures, MIT engineers and their collaborators have designed a new type of stent that could be used to deliver drugs to the gastrointestinal tract, respiratory tract, or other tubular organs in the body.

The stents are coated in a smooth layer of plastic etched with small “needles” that pop up when the tube is stretched, allowing the needles to penetrate tissue and deliver a payload of drug-containing microparticles. Those drugs are then released over an extended period of time after the stent is removed.

This kind of localized drug delivery could make it easier to treat inflammatory diseases affecting the GI tract such as inflammatory bowel disease or eosinophilic esophagitis, says Giovanni Traverso, an MIT assistant professor of mechanical engineering, a gastroenterologist at Brigham and Women’s Hospital, and the senior author of the study.

“This technology could be applied in essentially any tubular organ,” Traverso says. “Having the ability to deliver drugs locally, on an infrequent basis, really maximizes the likelihood of helping to resolve patients’ conditions and could be transformative in how we think about patient care by enabling local, prolonged drug delivery following a single treatment.”

Sahab Babaee, an MIT research scientist, is the lead author of the paper, which appears today in Nature Materials.

Inflammatory diseases of the GI tract, such as IBD, are often treated with drugs that dampen the body’s immune response. These drugs are usually injected, so they can have side effects elsewhere in the body. Traverso and his colleagues wanted to come up with a way to deliver such drugs directly to the affected tissues, reducing the likelihood of side effects.

Stents could offer a way to deliver drugs to a targeted portion of the digestive tract, but inserting any kind of stent into the GI tract can be tricky because digested food is continuously moving through the tract. To make this possibility more feasible, the MIT team came up with the idea of creating a stent that would be inserted temporarily, lodge firmly into the tissue to deliver its payload, and then be easily removed.

The stent they designed has two key elements — a soft, stretchy tube made of silicone-based rubber, and a plastic coating etched with needles that pop up when the tube is stretched. The design was inspired by kirigami, a technique that Traverso’s lab has previously used to design a nonslip coating for shoe soles.Others have used it to create bandages that stick more securely to knees and other joints.

“The novelty of our approach is that we used tools and concepts from mechanics, combined with bioinspiration from scaly-skinned animals, to develop a new class of drug-releasing systems with the capacity to deposit drug depots directly into luminal walls of tubular organs for extended release,” Babaee says. “The kirigami stents were engineered to provide a reversible shape transformation: from flat, to 3D, buckled-out needles for tissue engagement, and then to the original flat shape for easy and safe removal.”

In this study, the MIT team coated the plastic needles with microparticles that can carry drugs. After the stent is inserted endoscopically, the endoscope is used to inflate a balloon inside the tube, causing the tube to elongate. As the tube stretches, the pulling motion causes the needles in the plastic to pop up and release their cargo.

“It’s a dynamic system where you have a flat surface, and you can create these little needles that pop up and drive into the tissue to do the drug delivery,” Traverso says.

For this study, the researchers created kirigami needles of several different sizes and shapes. By varying those features, as well as the thickness of the plastic sheet, the researchers can control how deeply the needles penetrate into the tissue. “The advantage of our system is that it can be applied to various length scales to be matched with the size of the target tubular compartments of the gastrointestinal tract or any tubular organs,” Babaee says.

The researchers tested the stents by endoscopically inserting them into the esophagus of pigs. Once the stent was in place, the researchers inflated the balloon inside the stent, allowing the needles to pop up. The needles, which penetrated about half a millimeter into the tissue, were coated with microparticles containing a drug called budesonide, a steroid that is used to treat IBD and eosinophilic esophagitis.

Once the drug-containing particles were deposited in the tissue, the researchers deflated the balloon, flattening out the needles so the stent could be endoscopically removed. This process took only a couple of minutes, and the microparticles then stayed in the tissue and gradually released budesonide for about one week.

Depending on the composition of the particles, they could be tuned to release drugs over an even longer period of time, Traverso says. This could make it easier to keep patients on the correct drug schedule, because they would no longer need to take the drug themselves, but would periodically receive their medicine via temporary insertion of the stent. It would also avoid the side effects that can occur with systemic drug administration.

The researchers also showed that they could deliver the stents into blood vessels and the respiratory tract. They are now working on delivering other types of drugs and on scaling up the manufacturing process, with the goal of eventually testing the stents in patients.