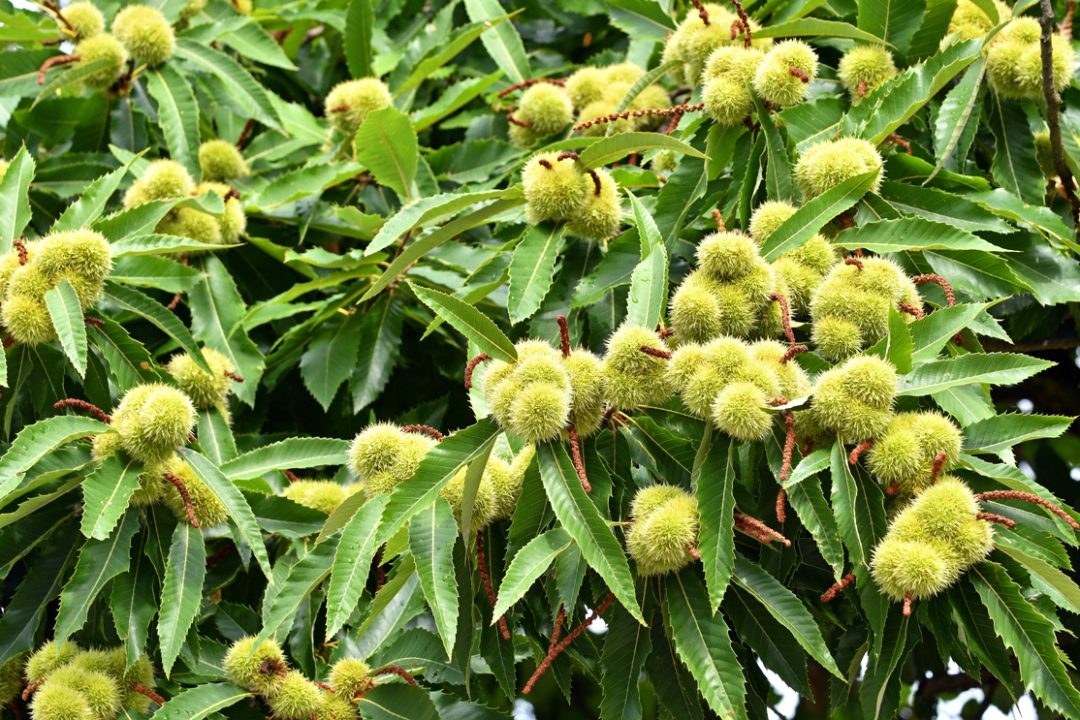 Scientists isolated a molecule, extracted from the leaves of the European chestnut tree, with the power to neutralize dangerous, drug-resistant staph bacteria. Frontiers in Pharmacology published the finding, led by scientists at Emory University.

The researchers dubbed the molecule Castaneroxy A, after the genus of the European chestnut, Castanea. The use of chestnut leaves in traditional folk remedies in rural Italy inspired the research.

“We were able to isolate this molecule, new to science, that occurs only in very tiny quantities in the chestnut leaves,” says Cassandra Quave, senior author of the paper and associate professor in Emory’s Center for the Study of Human Health and the School of Medicine’s Department of Dermatology. “We also showed how it disarms Methicillin-resistant Staphylococcus aureus by knocking out the bacteria’s ability to produce toxins.”

Methicillin-resistant Staphylococcus aureus (MRSA) causes infections that are difficult to treat due to its resistance to antibiotics. It is one of the most serious infectious disease concerns worldwide, labeled as a “serious threat” by the Centers for the Disease Control and Prevention. In the United States alone, nearly 3 million antibiotic-resistant infections occur in the U.S. each year, killing more than 35,000 people.

Antibiotics work by killing staph bacteria, which can lead to greater resistance among those few bacteria that survive, spawning “super bugs.” The Quave lab has identified compounds from the Brazilian peppertree, in addition to the European chestnut tree, that simply neutralize the harmful effects of MRSA, allowing cells and tissue to naturally heal from an infection without boosting resistance.

“We’re trying to fill the pipeline for antimicrobial drug discovery with compounds that work differently from traditional antibiotics,” Quave says. “We urgently need these new strategies.” She notes that antimicrobial infections kill an estimated 700,000 globally each year, and that number is expected to grow exponentially if new methods of treatment are not found.

First author of the Frontiers in Pharmacology paper is Akram Salam, who did the research as a PhD student in the Quave lab through Emory’s Molecular Systems and Pharmacology Graduate Program.

Quave is a medical ethnobotanist, researching traditional plant remedies to find promising leads for new drugs. Although many major drugs are plant-based, from aspirin (the bark of the willow tree) to Taxol (the bark of the Pacific yew tree), Quave is one of the few ethnobotanists with a focus on antibiotic resistance.

The story behind the current paper began more than a decade ago, when Quave and her colleagues researched written reports and conducted hundreds of field interviews among people in rural southern Italy. That pointed them to the European, or sweet, chestnut tree, native to Southern Europe and Asia Minor. “In Italian traditional medicine, a compress of the boiled leaves is applied to the skin to treat burns, rashes and infected wounds,” Quave says.

Quave took specimens back to her lab for analysis. By 2015, her lab published the finding that an extract from the leaves disarms even the hyper-virulent MRSA strains capable of causing serious infections in healthy athletes. Experiments also showed the extract did not disturb normal, healthy bacteria on skin cells.

Finally, the researchers demonstrated how the extract works, by inhibiting the ability of MRSA bacteria to communicate with one another, a process known as quorum sensing. MRSA uses this sensing signaling system to make toxins and ramp up its virulence.

For the current paper, the researchers wanted to isolate these active ingredients from the plant extract. The process is painstaking when done manually, because plant extracts typically contain hundreds of different chemicals. Each chemical must be separated out and then tested for efficacy. Large scale fraction collectors, coupled to high-performance liquid chromatographic systems, automate this separation process, but they can cost tens of thousands of dollars and did not have all the features the Quave lab needed.

Marco Caputo, a research specialist in the lab, solved the problem. Using a software device from a child’s toy, the LEGO MINDSTORMS robot creator, a few LEGO bricks, and some components from a hardware store, Caputo built an automated liquid separator customized to the lab’s needs for $500. The lab members dubbed the invention the LEGO MINDSTORMS Fraction Collector. They published instructions for how to build it in a journal so that other researchers can tap the simple, but effective, technology.

The Quave lab first separated out a group of molecules from the plant extract, cycloartane triterpenoids, and showed for the first time that this group actively blocks the virulence of MRSA. The researchers then dove deeper, separating out the single, most active molecule from this group, now known as Castaneroxy A.

“Our homemade piece of equipment really helped accelerate the pace of our discovery,” Quave says. “We were able to isolate this molecule and derive pure crystals of it, even though it only makes up a mere .0019 percent of the chestnut leaves.”

Tests on mouse skin infected with MRSA, conducted in the lab of co-author Alexander Horswill at the University of Colorado, confirmed the molecule’s efficacy at shutting down MRSA’s virulence, enabling the skin to heal more rapidly.

Co-author John Bacsa, director of Emory Department of Chemistry’s X-ray Crystallography Center, characterized the crystal shape of Castaneroxy A. Understanding the three-dimensional configuration of the crystal is important for future studies to refine and optimize the molecule as a potential therapeutic.

“We’re laying the groundwork for new strategies to fight bacterial infections at the clinical level,” Quave says. “Instead of being overly concerned about treating the pathogen, we’re focusing on ways to better treat the patient. Our goal is not to kill the microbes but to find ways to weaken them so that the immune system or antibiotics are better able to clear out an infection.”