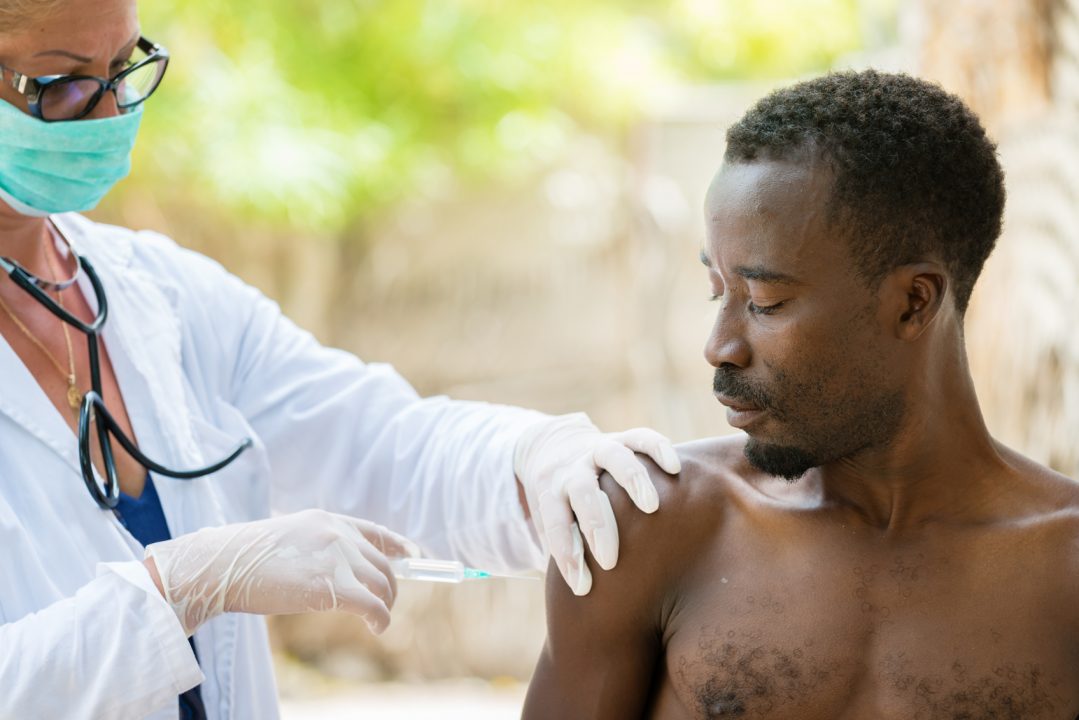 Researchers from the University of Oxford and their partners have today reported findings from a Phase IIb trial of a candidate malaria vaccine, R21/Matrix-M, which demonstrated high-level efficacy of 77% over 12-months of follow-up. In their findings (posted on SSRN/Preprints with The Lancet) they note that they are the first to meet the World Health Organization’s Malaria Vaccine Technology Roadmap goal of a vaccine with at least 75% efficacy. The authors report (in findings in press with The Lancet) from a Phase IIb randomised, controlled, double-blind trial conducted at the Clinical Research Unit of Nanoro (CRUN) / Institut de Recherche en Sciences de la Santé (IRSS), Burkina Faso. 450 participants, aged 5-17 months, were recruited from the catchment area of Nanoro, covering 24 villages and an approximate population of 65,000 people. The participants were split into three groups, with the first two groups receiving the R21/Matrix-M (with either a low dose or high dose of the Matrix-M adjuvant) and the third, a rabies vaccine as the control group. Doses were administered from early May 2019 to early August 2019, largely prior to the peak malaria season. The researchers report a vaccine efficacy of 77% in the higher-dose adjuvant group, and 71% in the lower dose adjuvant group, over 12 months of follow-up, with no serious adverse events related to the vaccine noted. Following these results, the Phase IIb trial, which was funded by the EDCTP2 programme supported by the European Union (grant number RIA2016V-1649-MMVC), was extended with a booster vaccination administered prior to the next malaria season one year later. The researchers, in collaboration with Serum Institute of India Private Ltd., and Novavax Inc., have now started recruitment for a Phase III licensure trial to assess large-scale safety and efficacy in 4,800 children, aged 5-36 months, across four African countries. Halidou Tinto, Professor in Parasitology, Regional Director of IRSS in Nanoro, and the trial Principal Investigator said: ‘These are very exciting results showing unprecedented efficacy levels from a vaccine that has been well tolerated in our trial programme. We look forward to the upcoming phase III trial to demonstrate large-scale safety and efficacy data for a vaccine that is greatly needed in this region.’ Adrian Hill, Director of the Jenner Institute and Lakshmi Mittal and Family Professor of Vaccinology at the University of Oxford, and co-author of the paper, said: ‘These new results support our high expectations for the potential of this vaccine, which we believe is the first to reach the WHO’s goal of a vaccine for malaria with at least 75% efficacy. ‘With the commitment by our commercial partner, the Serum Institute of India, to manufacture at least 200 million doses annually in the coming years, the vaccine has the potential to have major public health impact if licensure is achieved.’ Professor Charlemagne Ouédraogo, Minister of Health, in Burkina Faso said: ‘Malaria is one of the leading causes of childhood mortality in Africa. We have been supporting trials of a range of new vaccine candidates in Burkina Faso and these new data show that licensure of a very useful new malaria vaccine could well happen in the coming years. That would be an extremely important new tool for controlling malaria and saving many lives.’ Professor Alkassoum Maiga Ministry of Higher Education, Scientific Research and Innovation in Burkina Faso, said: ‘I am proud of Burkina Faso researchers who made a great contribution to reach this important milestone. Hope that the upcoming phase III trial will confirm these exciting findings and that this vaccine could have a real impact on this disease affecting millions of children every year.’ Dr Cyrus Poonawalla and Mr Adar Poonawalla, Chairman and CEO of the Serum Institute of India said: ‘We are highly excited to see these results on a safe and highly effective malaria vaccine which will be available to the whole world through an excellent collaborative effort between Serum Institute, the University of Oxford and Novavax Inc.. Serum Institute is committed to global disease burden reduction and disease elimination strategies by providing high volume, affordable vaccines. We are highly confident that we will be able to deliver more than 200 million doses annually in line with the above strategy as soon as regulatory approvals are available.’ Dr Michael Makanga, EDCTP Executive Director, said: ‘We congratulate the Multi-stage Malaria Vaccine Consortium on these highly promising results from the Burkina Faso trial of R21. This study represents a key advance in the clinical development of the R21 malaria vaccine towards licensure, and an important step closer to malaria control and elimination.’ Gareth Jenkins, Director of Advocacy, Malaria No More UK, said: ‘An effective and safe malaria vaccine would be a hugely significant extra weapon in the armoury needed to defeat malaria, which still kills over 270,000 children every year. For decades, British scientists have been at the forefront of developing new ways to detect, diagnose, test and treat malaria, and we must continue to back them. ‘A world without malaria is a world safer both for the children who would otherwise be killed by this disease, and for us here at home. Countries freed from the malaria burden will be much better equipped to fight off new disease threats when they inevitably emerge in the future.’