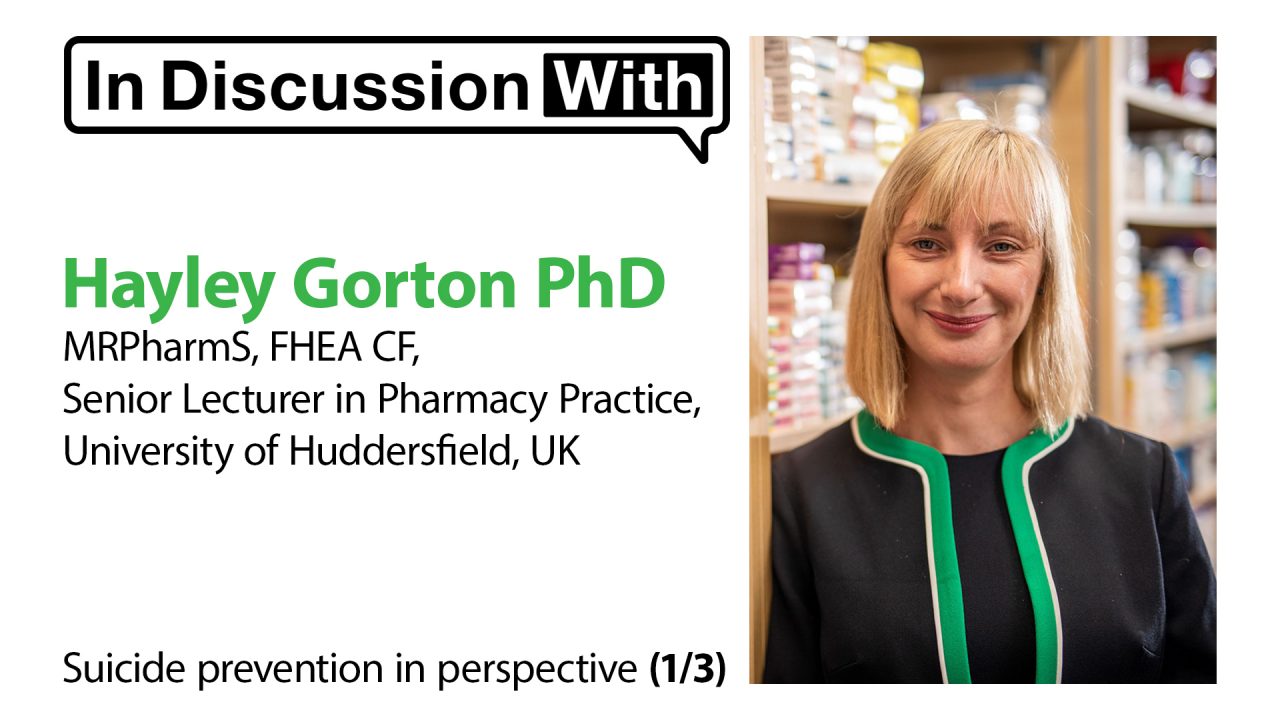 Pharmacists and their teams represent an untapped resource in the field of suicide prevention. IMI spoke to Dr Hayley Gorton, senior lecturer in pharmacy practice at the University of Huddersfield and suicide prevention researcher, to find out more.

Dr Gorton’s interest in suicide prevention started with a pharmaco-epidemiology project that involved looking at big data and trends related to suicide and self-harm.

Worldwide there are more than 700 000 deaths by suicide every year this is likely to be an underestimate due to difficulties with data collection. The World Health Organization (WHO) aims to reduce this by one third by 2030. In England and Wales in 2020 there were 5224 suicides. “This was actually lower than the 2019 data, which might be a surprise to some people and is actually hopeful in a sense because people have obviously been concerned about the impact of the pandemic on suicides”, says Dr Gorton. However, we should not be complacent because the potential mental health effects of the pandemic may continue alongside effects arising from the economic situation, which have been known to influence suicide rates in the past.

Pharmacists and their teams represent a hitherto untapped resource in the multidisciplinary field of suicide prevention. Moreover, all of the work that’s been done in relation to pharmacy teams and suicide prevention has been focused on community pharmacy and Dr Gorton believes there are roles for all sectors of the profession. “What’s particularly important about primary care settings is that actually two-thirds to three-quarters of people who die by suicide are not under specialist mental health services, so that means they’re with us in primary care and we have opportunities to intervene”, she says.

Research conducted in in England about the role of pharmacy teams in suicide prevention has identified a social-clinical-holistic role – that is, knowing people and talking to people. “That came through very strongly in our first study which was an interview of pharmacy staff in in England”, says Dr Gorton. Further work has shown that community pharmacy teams often report having conversations with people about suicide.  “In fact, 71% of them had reported knowingly having spoken to someone about suicide at least once and, actually, some work worldwide suggests this is probably higher because people [may be] indicating signs of suicide that perhaps have not been recognised” adds Dr Gorton. Other topics identified were the need for triage and referral, the question of means restriction and the fact that people may use medicines that are obtained from the pharmacy in poisoning. (Poisoning is the second most common method of suicide in the UK).

The Zero Suicide Alliance training was included in the pharmacy quality scheme in England. This is an incentivisation scheme in which pharmacies are remunerated for meeting certain quality standards. “We know that 72,000 of [patient-facing staff] in England have done this training. It’s a 20-minute interactive video and the key message really is about asking directly about suicide and also thinking about aiding triage and referral. That’s freely available training that anyone can access”, explains Dr Gorton.

Dr Hayley Gorton MPharm, PhD, PGDip (ClinPharm), MRPharmS, FHEA, CF is a senior lecturer in pharmacy practice at the University of Huddersfield. She is also a co-chair of the Association for International Association of Suicide Prevention special interest group on suicide prevention in primary care. At the recent FIP Congress (Seville, 2022) Dr Gorton gave a presentation entitled, Suicide prevention: Are pharmacy teams an overlooked and indispensable asset?