Pain management and opioid use in the community 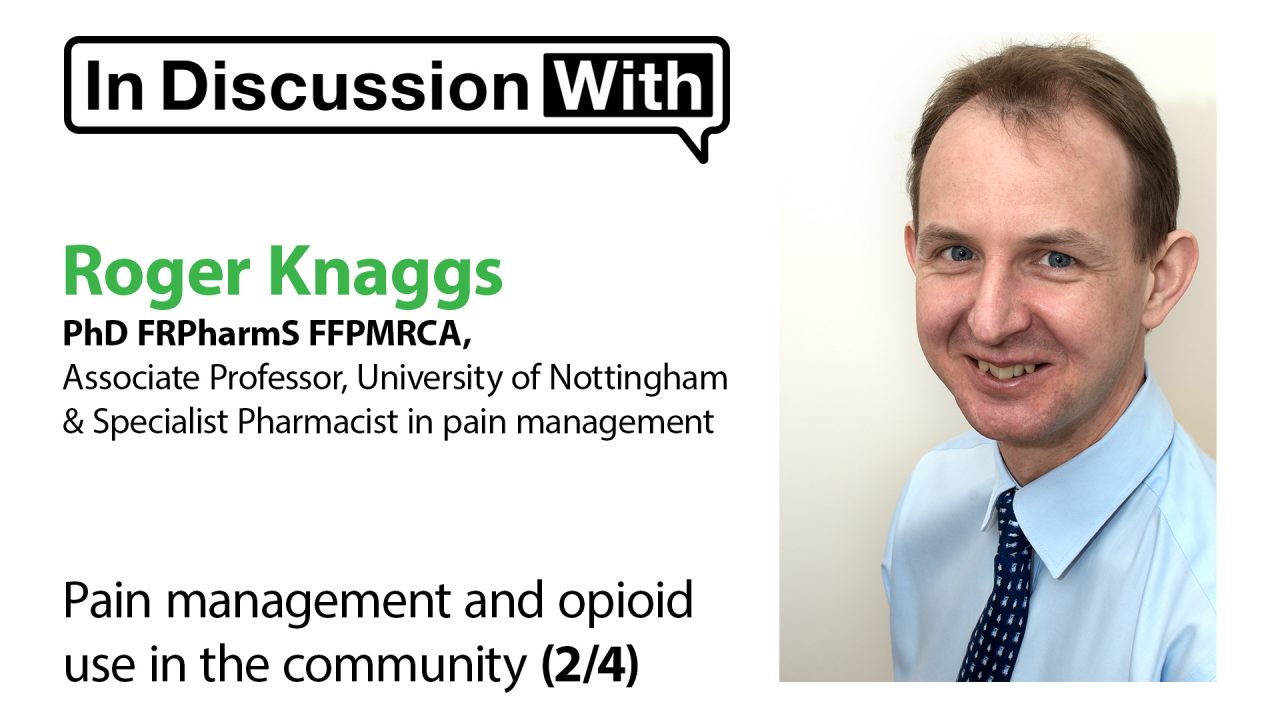 Better education about opioids and careful patient monitoring could be the keys to reducing opioid-dependence and effective pain management, according to Professor Roger Knaggs (Specialist Pharmacist in pain management, Nottingham).

Professor Knaggs’ role in the clinic is to review patients who have been taking analgesic medicines for many years. “We look at the effectiveness of those medicines – in many cases patients will say that actually they are providing relatively little benefit …. A phrase that is very often used is “take the edge off” their symptoms, which really is a sign that they are not doing what both the patient and we as healthcare professionals would like”, he explains.  He then discusses with patients how the medicines are impacting their pain but also their life more generally.  This leads on to a discussion about other approaches to managing pain that they may wish to consider, such as improving their skills in self-management and more psychologically-based measures, rather than more medicines. Physical activity can also play a role here. “Activity can range from simple chair-based activity or a movement within one’s daily routine, but then it may extend to activities such as yoga. …. As individuals become more confident in their own abilities, maybe going to the gym to do light exercise or swimming…..It is really down to the individual as to what they’re going to feel most comfortable doing”, he says.

“I think the first thing to say is that ‘opioid use disorder’ is a relatively new term that was introduced in the DSM-5 classification of illnesses and really describes problematic opioid use and that may be associated either with illicit substances or prescribed medicines and that it is associated with significant distress and impairment of activities”, he says  The majority of people that he sees in the clinic are taking prescribed medicines and it is relatively unusual for him to see people who are taking illicit opioids.  Nevertheless, a sizable proportion of patients are certainly dependent upon their opioids. However, whether they fit all of the diagnostic criteria for opioid use disorder is debatable, he explains. “It has not really been possible yet in the UK to quantify the scale of opioid use disorder related to prescription opioids”, he adds.

The main way to tackle opioid use disorder is to consider the initial prescription as an opioid trial. “If after a period of four to six weeks the opioid is not providing any benefit then that is the time to consider tapering and discontinuing rather than letting the prescription go on to repeat and patients then taking opioids for many months – and sometimes even years – without a great deal of benefit”, he says.

Initially, most of the evidence for opioid use disorder related to opioids for chronic pain. “However, there is a defined group of people [post-operative patients] who may be discharged from hospital with a supply of opioids and in many cases these patients were not actually taking opioids prior to that procedure so they are a very discrete group of individuals”, he says. A careful explanation when the opioids are first prescribed and then regular review thereafter are important measures, he adds.