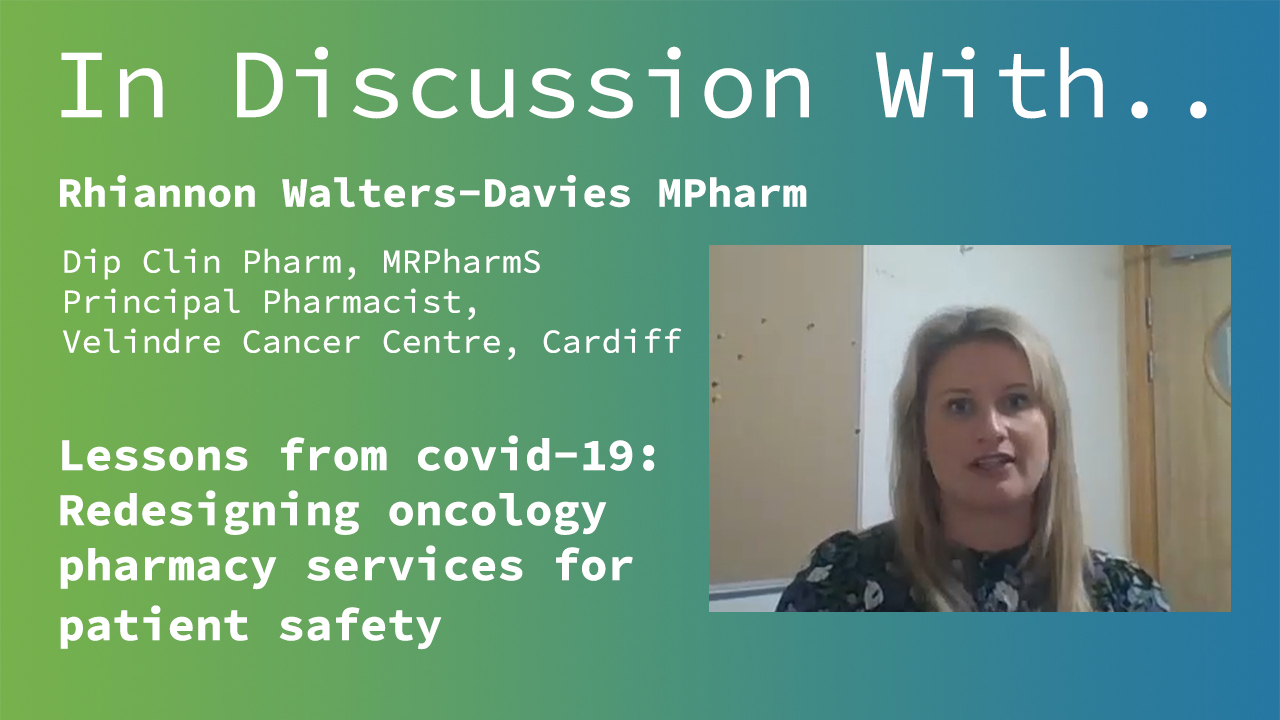 Modifications of cancer treatment regimens to reduce time spent in hospital, a drive-through pharmacy service and a technician-led virtual counselling clinic were some of the measures introduced at Velindre Cancer Centre, Cardiff, explains Rhiannon Walters-Davies, Principal Pharmacist, Procurement and Homecare.

During the covid pandemic, oncology teams throughout the National Health Service made both operational and clinical changes to limit patient exposure to the risks of the virus whilst maintaining good governance. “Patient safety is fundamental to good patient care”, says Ms Walters-Davies.

Operational measures were designed to minimise the time that patients spent in hospital. There was widespread expansion of homecare services for both intravenous and oral treatments. The National Medicines Homecare Committee specifically prioritised oncology services. Some trusts also used courier services to deliver medicines to patients.

At Velindre Cancer Centre a drive-through pharmacy service was introduced so that patients could collect medication without having to leave their cars.

From the clinical perspective, some treatments were switched from intravenous to oral administration, for example, oral tyrosine kinase inhibitors were introduced as first-line treatment in in renal and melanoma settings.  Less frequent administration was another approach  – exploiting the option to use larger doses at longer intervals.  One example of this was nivolumab for lung cancer, which is normally given every two weeks, requiring twice monthly hospital visits. After taking advice from the National Institute for Health and Clinical Excellence (NICE) an off-label dosing regimen was introduced that involved four-weekly administration using a double dose.  “This meant that patients had to visit the hospital only once a month instead of twice”, explained Ms Walters-Davies. “There were also other examples of extending administration schedules, particularly in area of immunotherapy”, she added.

The use of drive-through services and couriers removed the traditional  ‘touch point’ that pharmacists have when handing out medicines and the team at Velindre Cancer Centre realised that an alternative mechanism  was needed to answer patients’ questions and provide patient education about drug treatment.  “We built on our existing patient education service, which is led by pharmacy technicians, and moved to a virtual model where we offered patients counselling by telephone or video consultation so that they got the same level of contact and counselling that they had under previous system”, explains Ms Walters-Davies.  The service is also provided on an ad-hoc basis, so if patients have questions about drug treatment they can enter a virtual waiting room and be admitted electronically when a pharmacist or technician is available for a consultation. Non-medical prescribers undertaking medicines’ reviews also moved to a virtual model using telephone and video consultations. “The digital platform is something that works really well – with a lot of good feedback from patients”, says Ms Walters-Davies.