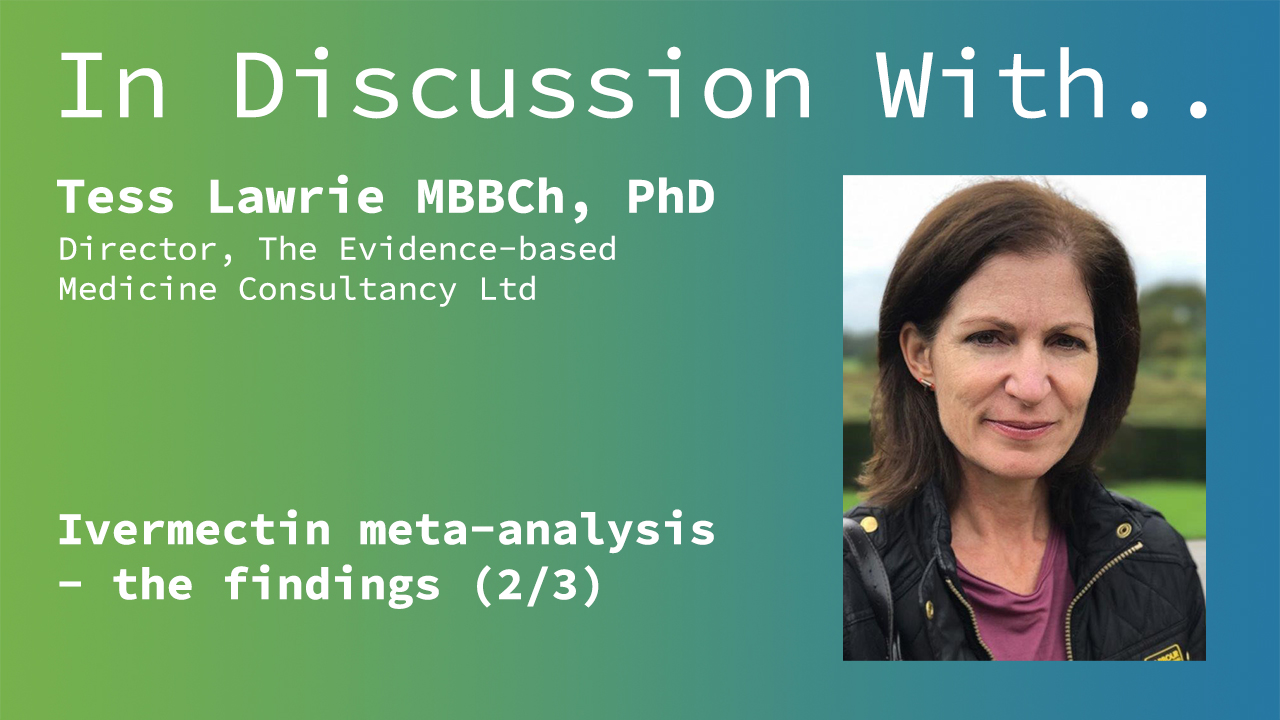 Dr Tess Lawrie, Director of the Evidence-based Medicine Consultancy Ltd, describes the key findings from her recently-published meta-analysis of ivermectin trials for covid-19.

The first finding was that ivermectin substantially reduces death amongst hospitalised patients with mild, moderate or severe covid-19. Six randomised controlled trials (RCTs) were included and the pooled estimate of reduction in the risk of death was 83% (95% CI 67-92%). “We don’t know what the precise estimate is, but even if it is on the lower estimate or even half as good it is still a substantial reduction in deaths”, say Dr Lawrie. This was graded as ‘moderate certainty’ evidence. The uncertainty is not related to whether or not ivermectin prevents death, but the estimate of the size of the effect. “We know – the evidence shows –  it prevents death; the only uncertainly is by how much”, emphasises Dr Lawrie.

“We found a substantial reduction in the risk of death if you receive ivermectin instead of receiving the control [treatment] and it was consistent across all of the studies that we included”, she says. Furthermore, the statistical measure that is used to measure the consistency of the data showed no inconsistency,  “so all the studies were showing the same thing – that ivermectin reduces death substantially in hospitalised patients…… whichever way you are looking at it, it is a massive reduction”, adds Dr Lawrie

The trials of ivermectin prophylaxis included both RCTs and observational trials.  “It doesn’t really matter whether you include OCTs and RCTs or RCTs only  –  all the studies are saying the same thing”,  comments Dr Lawrie,

There were four studies that reported data on covid prophylaxis with ivermectin. They were conducted amongst health care workers and people who had been exposed to covid-19.  The analysis found an 88% reduction, on average, in the risk of acquiring a covid infection amongst the people who had received ivermectin compared with controls In absolute terms this amounts to an infection rate of about 4% in those who had received ivermectin compared with 35% infection rate in the control group. This evidence was graded as ‘moderate certainty’, mainly because of study design limitations. However, the findings were consistent across all four studies. “So again it’s not a question of whether ivermectin reduces the risk of infection, but it’s just a question of how much”, says Dr Lawrie.

Regarding future trials Dr Lawrie points out that placebo controlled trials for ivermectin treatment of covid are no longer ethical. The absolute risk of death in hospitalised covid-19 patients treated with ivermectin is 1.3% but for those who receive placebo as control treatment the risk of death is about 8%. “A doctor enrolling someone in a study would have to say,  “Well, the existing evidence shows that if you get ivermectin you’ll have a 1%  chance of dying and if we don’t give it to you you’ll have a 8% chance of dying”, so I can’t really imagine that anybody would be prepared to sign a form like that”, explains Dr Lawrie.