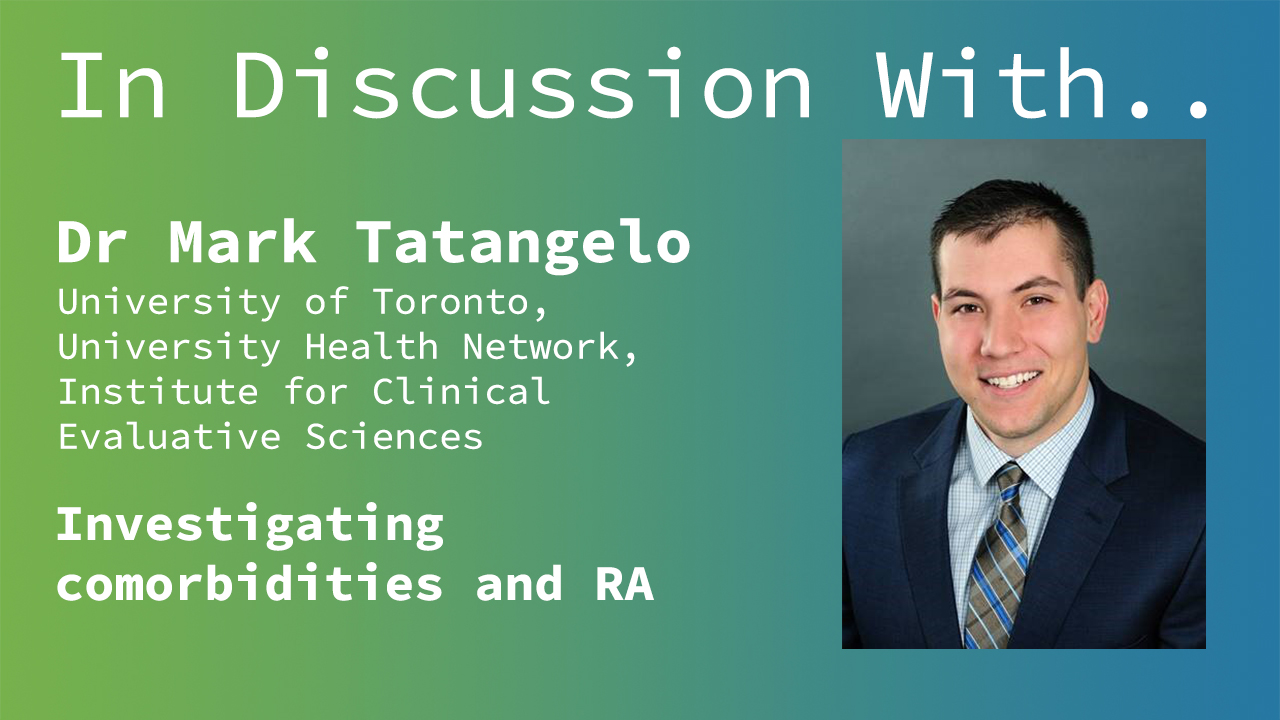 Rheumatoid arthritis (RA) affects about one percent of the population in the UK and comorbidities are reported to be common. A recent study from Canada was designed to disentangle comorbidities of RA from other underlying diseases.

IMI interviewed Dr Mark Tatangelo, a health services researcher with a special interest in musculoskeletal diseases and first author of the study to find out more.

When Dr Tatangelo conducted a systematic review of the literature relating to comorbidities in RA he found a large volume of published material but also found considerable variability in study design, quality of methodology and standardisation between studies. Not only were there big differences between the different studies on comorbidities but there was also a limited amount of long-term, high-quality population data where all the comorbidities of RA were examined before and after diagnosis.  “What I really noticed was that the research methods that were being used were not adequate – they weren’t strong enough to measure causal attribution”, he says. As a result it was difficult to be certain that a comorbidity of RA was actually related to the disease itself. “The methods that were being used weren’t appropriate to make that distinction as to what comorbidities were related to RA and what comorbidities were underlying or occurring irrespective of the disease diagnosis”, he adds.

A longitudinal matched cohort study design was used and patients who had had an RA diagnosis in each year from 1995 to 2015 were included. Each RA patient was matched to a patient who did not have RA who was alive in the same time period. An interesting feature of the study was the use of two separate (non-RA) control groups.  The first control group was matched only on age and sex. “The second control group is the really innovative one because what we did was to match on age and sex but also on pre-diagnosis medical history”, explains Dr Tatangelo. The reason for this approach was because it allowed the researchers to separate the directly-attributable comorbidities of RA from the indirectly attributable comorbidities of RA. It also allowed them to separate the underlying age- and sex-related conditions that would have occurred even in the absence of an RA diagnosis.

The main finding from the study was that RA patients have more comorbid conditions compared to non-RA patients and, interestingly, these conditions were detectable months or years before the diagnosis. The comorbidities peak in the year of diagnosis but then decrease after diagnosis. Approximately half of the comorbidities were directly attributable to RA. “We also found that in the pre-diagnosis period the indirect effects of RA are observable but the direct effects of RA manifest after the diagnosis ….. something that we would expect just with an understanding of the disease”, explains Dr Tatangelo.  Most of the comorbidities were of low and medium severity. The final finding was that the RA patients who were diagnosed in later calendar years appeared to have fewer comorbid conditions compared to those diagnosed in earlier calendar years.