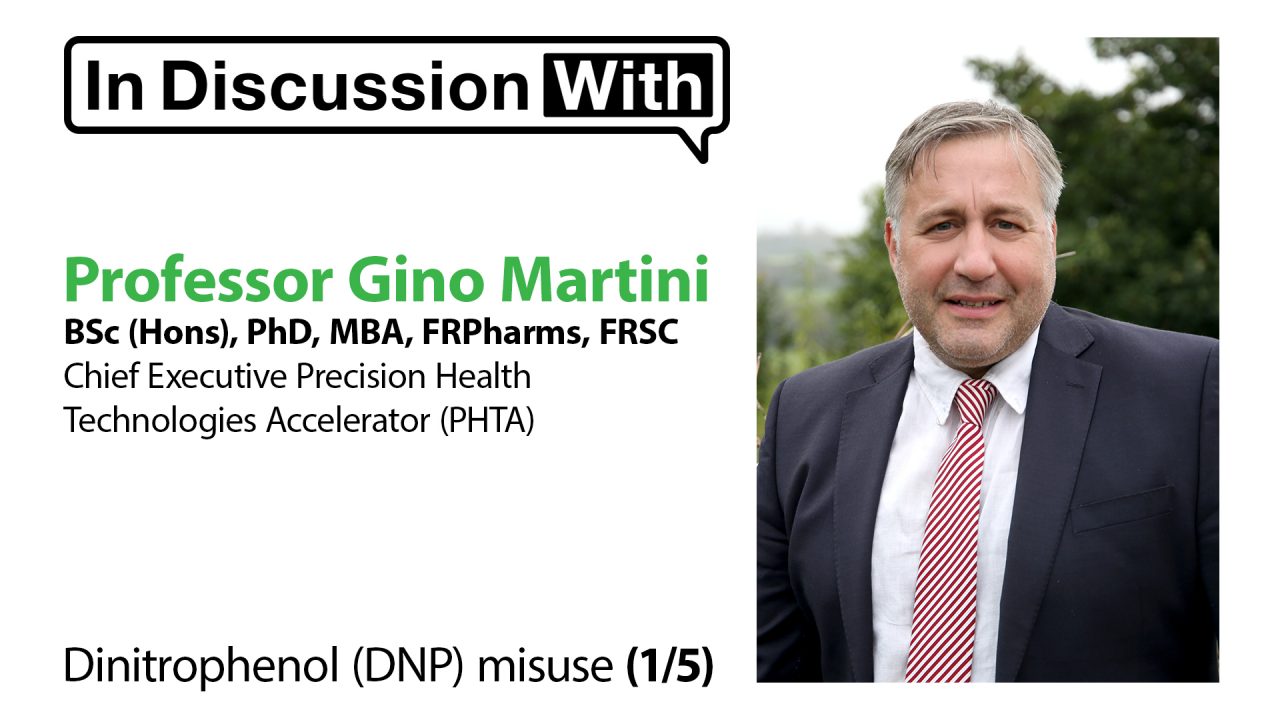 Professor Gino Martini was recently appointed as the Chief Executive of the Precision Health Technologies Accelerator (PHTA) at Birmingham University. Previously he was Chief Scientist at the Royal Pharmaceutical Society (RPS). IMI spoke to him to find out more about his campaigns against the misuse of dinitrophenol and nitrous oxide and his new role at the PHTA.

The PHTA has been conceived to spur innovation in the West Midlands as part of the Birmingham Health Innovation campus – a new science park designed to concentrate life sciences in the region. In his previous role as Chief Scientist at the RPS he took a particular interest in the unwelcome resurgence in the misuse of dinitrophenol (DNP) for weight loss. “I always took the view that every life was important; I never subscribed to the view that because [only] 36 people died as a result of exposure to DNP or to nitrous oxide, for example, that it wasn’t important. Well, you try to have that conversation with the parents who just lost their daughter or their son…..”, he says.

He believes that pharmacists should play a role in stopping misuse of harmful chemicals. “Dinitrophenol is a disgusting chemical”, he says. In the 1930s it was banned by the Food and Drug Administration in the USA and described as “extremely dangerous and not fit for human consumption”.1

Professor Martini says: “Effectively what DNP does – it actually stimulates the mitochondria in your cells to work faster and therefore they generate more heat,   and unfortunately young people who’ve been taking it suddenly overheat and die of heat exposure. It’s a horrible way to die.”  The recent resurgence in use of DNP prompted Professor Martini and his predecessors, Professor Jayne Lawrence and Professor Tony Moffat to campaign for its removal. Recent Presidents of the RPS, Ashok Soni and Sandra Gidley have also been involved and have spoken to the parents of victims, he notes.

It has been argued that dinitrophenol cannot be banned because it is required for some industrial processes. However, Professor Martini says, “My preference is for it to be banned and ….. I believe the current position from the Royal Pharmaceutical Society is for it to be banned…….  I can’t see any use for it in fertilizers. I just think it’s completely outdated for use in the 2020s.”

Another option might be to ban the compounding of DNP into capsules or sachets. Professor Martini says: “People were shipping this chemical in bulk – and so if you banned the compounding of it – you actually stop it from being put into capsules or sachets, because that’s how it was being given to young people. So, it’s almost like another step that says, “Hold on, you know you can’t say you didn’t know what was going to happen because you’ve taken the step to compound it, i.e. put it into a capsule. Therefore, that’s illegal so you can’t do it.”  Anything that adds another obstacle in people trying to distribute this particular chemical I think is a good thing – but let’s get back to basics, let’s get it banned outright or certainly under control of a pharmacist. …..   Let’s just get this thing out of circulation. “

Finally, some people have called for DNP to be made a Class C drug under the Misuse of Drugs Act. “Well, you see, we shouldn’t be calling it a drug. I’ve been very careful ….  I’ve used the word ‘chemical’. During the 1930s we were told that there was no medical use for it – it’s a chemical. ….. Any rescheduling is just a waste of time because it has no therapeutic use at all. So, treat it as a chemical, treat it as a nasty chemical and then and just get it banned – or so restricted that nobody can get their hands on it”, he concludes.